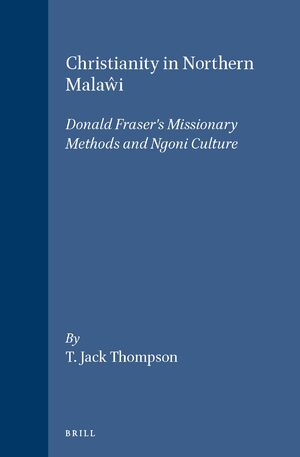 Christianity in Northern Malaŵi
Donald Fraser's Missionary Methods and Ngoni Culture
Series: Studies in Christian Mission, Volume: 15
Author: T. Jack Thompson
Christianity in Northern Malawi deals with the interaction of the missionary methods of the Scottish missionary Donald Fraser and the traditional culture of the Ngoni people of northern Malawi in the late 19th and early 20th centuries.
It looks at Ngoni origins and culture prior to first contacts with the missionaries, at the early life and ideas of Fraser, and at Fraser's disagreements with some of his Scottish colleagues. There are also sections on Ngoni interactions with the early colonial government, and the development of a genuinely Ngoni Church.
The book uses primary and oral sources, some of which were not previously available.
E-Book