Clear All Modify Search
Download Citations
Dialectic and Who We Are in the Alcibiades
Author: Albert Joosse

In the Platonic Alcibiades, Socrates raises two central philosophical questions: Who are we? and: How ought we to take care of ourselves? He answers these questions, I argue, in his famous comparison between eyes and souls. Both answers hinge upon dialectic: self-care functions through dialectic because we are communicating beings. I adduce arguments for this from the set-up and language of the comparison passage. Another important indication is that Socrates expressly refers back to an earlier, aborted attempt to describe who we are in terms of using discourse. Rather than recommending to Alcibiades a life of contemplation apart from interpersonal exchange, Socrates presents such exchange as central to our self-improvement and identity.

The Road to Wisdom: A New Conceptualization of Friendship in Fourth-Century bce Athens1
Author: Albert Joosse

In the Athens of the fourth century bce we find a new conceptualization of friendship. This conceptualization has been made possible by a new understanding of wisdom. The most influential statement of the new view is found in the Platonic dialogue Alcibiades i.

The way for the central role of wisdom in this picture has been paved by larger cultural changes. In order to provide a suitable context for an intellectualist understanding of wisdom and for the emergence of the new model of friendship, the first section of this paper describes earlier ways of thinking about relationships, with special attention to the place of wisdom with regard to them. 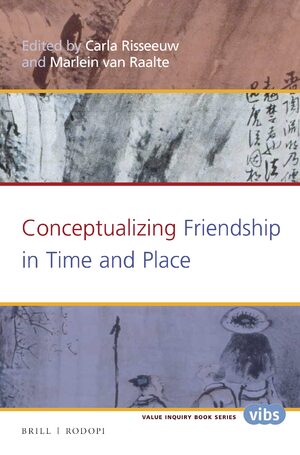 In: Conceptualizing Friendship in Time and Place

Self-knowledge and Politics in the Alcibiades i
Author: Albert Joosse

This paper offers a case for recognizing the Alcibiades i as a contribution to political philosophy. In so doing, it also shows that the dialogue is much more unified than it is usually considered to be in the scholarly literature. The paper focuses on the connection between two passages: the apparently aporetic passage of 124e1–127d5, in which Socrates questions Alcibiades about the content of political expertise; and Socrates’ exhortation to Alcibiades to get to know himself as his soul (127e9–133c6). The section on self-knowledge provides central conceptual tools that help us articulate the political philosophy that is implicit in the aporetic passage. First, knowledge of one’s humanity is key to politics, understood as an expertise that has people as its proper object. Second, politics deals with human beings qua human beings, not in accidental specialisations. Third, the section on self-knowledge instantiates political rule in the conversation between Socrates and Alcibiades. Fourth, the later section helps resolve the dilemma between friendship as unanimity and friendship as justice that brought 124e-127d to its aporetic close. Finally, the combination of the two passages yields two scenarios of political rule: one of education and one of cooperation. It shows, in essence, what is involved in Alcibiades’ description of politics as an expertise that deals with people: it is rule of fellow rulers.

The Platonic Alcibiades i is well known as a protreptic text par excellence and contains a classic argument for the Platonic view that human beings are identical with their souls. In this paper I offer a case for reappraising this dialogue as contributing to political philosophy. I argue that there is an important connection between, on the one hand, the famous passage in which Socrates urges Alcibiades to get to know himself as his soul (127e9–133c6) and, on the other hand, an earlier, apparently aporetic passage in which Socrates questions Alcibiades about the content of political expertise (124e1–127d5). As I hope to show, the later passage contains essential concepts and arguments for solving the puzzles that at first prove insuperable for Alcibiades in the earlier passage. If my interpretation is plausible, the dialogue provides a positive view of what politics should be. A secondary implication of my interpretation is that the dialogue is much more unified than it is usually considered to be in the scholarly literature.

I will proceed as follows. After a brief overview of the dialogue (Part i), I will discuss some of the problems of argument and composition that scholars have identified in the text (Part ii). In particular, I will consider a well-known attempt to demonstrate the unity of the Alcibiades i, offered by Julia Annas in 1985. Annas convincingly argues that the theme of self-knowledge is the guiding thread that unites the dialogue. Even Annas’s article, however, does not provide a meaningful connection between the abortive account of politics given in Stephanus pages 124e1–127d5 (a part of the text to which I will refer as “the political section”) and the rest of the dialogue. Next, I analyse this political section in more detail (Part iii). I then turn to the climactic passage of the dialogue (127e9–133c6), in which Socrates attempts to demonstrate to Alcibiades that he is identical with the best aspect of his soul. I will argue that this passage helps us to solve the difficulties treated in Part iii and allows us to sketch the resulting view, the political philosophy which Socrates offers to Alcibiades (Part iv).

Let me make two preliminary remarks before turning to the text. First, I make no assumptions about, nor will I address, the issue of the dialogue’s authenticity. Second, the connections between this dialogue and other texts in the corpus are many. I have omitted reference to them in order to focus on the internal coherence of this dialogue. 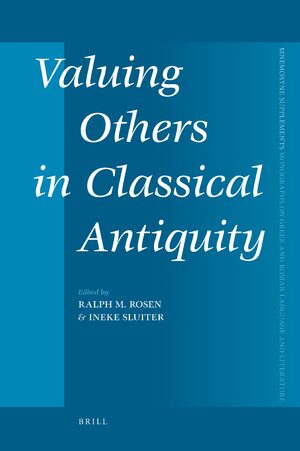 In: Valuing Others in Classical Antiquity

This paper considers the intertextual role of two citations in Plato’s Charmides. The first, from Homer, is introduced by Socrates. The second, from Hesiod, is introduced by Critias. I argue that these citations reveal their full meaning only when their original contexts are considered. In particular, the source context in Hesiod makes clear that Critias’ citation is meant as a response to Socrates’ quote. The dialectic between Critias and Socrates thus turns into a poetic rivalry. It is a rivalry with substantive implications about sôphrosunê and that raises larger questions about authority and interpretation.