The Siphonini (Diptera: Tachinidae) of Europe
Series: Fauna Entomologica Scandinavica, Volume: 33
Author: Andersen
The present volume presents a detailed account of the taxonomy, biology and distribution of the European species of Siphonini. This group of tachinid Diptera totals 58 species in Europe of which 6 are here described as new to science. In most species, the immatures live as endoparasitolds of lepidopterous larvae, but a few species even attack tipulid larvae. Several species of Siphonini are of great economic interest as agents for the control of lepidopterous and tipulid pests in agriculture and forestry.
An analysis and proposal on the systematic position of the Siphonini is given together with a key to larger taxonomic entities of Tachinidae. The generic classification is also critically emphasized. A separate chapter summarizes aspects of the group's natural history: life-cycles, mating behaviour, oviposition strategies, etc. The taxonomic part contains identification keys to genera and species, and for each species a diagnosis, a description and accounts on the nomenclature, biology and distribution is given. A separate catalogue details the provincial distribution of the 47 species occurring in Fennoscandia and Danmark. No less than 275 line drawings and 15 colour illustrations accompany the text.
Hardback 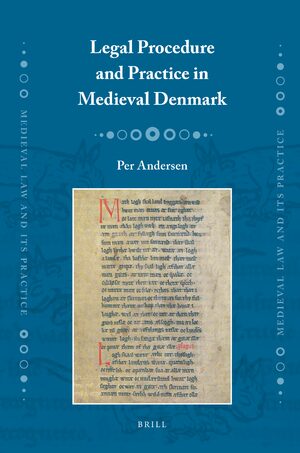 Legal Procedure and Practice in Medieval Denmark
Series: Medieval Law and Its Practice, Volume: 11
Author: Per Andersen
This book offers a comprehensive examination of how the Fourth Lateran Council’s prohibition against trial by ordeal was implemented in Danish secular law and how it required both a fundamental restructuring of legal procedure and an entirely different approach to jurisprudence in practice. It offers a broader understanding of how ideology could penetrate and change jurisprudence firstly by changing the norms, secondly by presupposing new kind of legal institutions. Rather than focusing on pure dogmatics, this investigation will focus on uncovering the ideological character of procedure with regard to how those learned in law and those holding political power thought that jurisprudence needed to be constructed in order to ensure that justice was done in medieval Denmark.
E-Book