Max Weinreich used the term yídishlekh to describe the traditional, ‘Jewishly patterned’ style of writing in Yiddish. Weinreich illustrated this style by comparing Mendele Moykher Sforim’s ‘Jewishly-styled’ 1884 Yiddish translation of Leo Pinsker’s Autoemanzipation (Berlin 1882) with the original German-language text. The present article demonstrates that in Judezmo as well as Yiddish, writers have consciously used ‘Jewish styling,’ and its converse, in the diverse literary genres they cultivated from the Middle Ages into the early twentieth century. However, as a result of somewhat divergent social, political, and ideological trends in the Judezmo as opposed to Yiddish speech communities later in the twentieth century, Yiddish writers today prefer to incorporate features of ‘Jewish styling’ in their writing, while Judezmo writers tend to reject them.

From the 19th–20th-century beginnings of modern linguistics, scholars reported on various results of interactions between diverse language speakers; but it was only with Uriel Weinreich’s Languages in Contact (1953) that a solid theoretical basis for the systematic study of contact linguistics was elaborated. The present article studies lexical influences from South Slavic on Judezmo (Ladino/Judeo-Spanish) resulting from contact during the 16th–19th centuries between speakers of these two languages in the regions that, between 1918 and 1992, were known jointly as Yugoslavia. During the Ottoman and then Austro-Hungarian periods, borrowings in local Judezmo from South Slavic were relatively few compared with Turkisms. But from the nineteenth century, when the South Slavs gained political independence, Serbo-Croatian exerted an ever-increasing influence on Judezmo in this region. The case of Judezmo there differs considerably from Yiddish in Slavic Eastern Europe throughout the same period, as described by Uriel Weinreich and others. 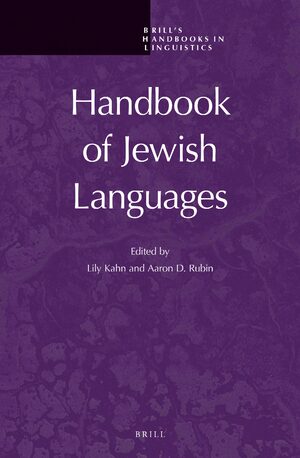 In: Handbook of Jewish Languages