Clear All Modify Search
Download Citations
10 “Devilish fellows who test patience to the very limit”: Naturalists in the Pacific in the Age of Cook
Author: Glyn Williams

UNION AND UNITY OUT OF DIVERSITY
Authors: Glyn Williams and Gruffud Owain Williams

Kant’s universalism had a profound influence upon the formation of the modern state and on subsequent debates about the relationship between the state, language and culture. While proclaiming its own individuality each European state also subscribed to a universalism that was inscribed in democracy. The EU is now confronted by the dilemma of seeking to subscribe to universal principles while promoting linguistic diversity. Simultaneously the hierarchy of European languages is changing through the effect of globalisation and modernisation. Language group relations vary across the states of Europe, and the march of a reflexive modernity obliges a consideration of how different European states contribute to the European project. As the new Europe unfolds we are obliged to consider the extent to which language planning can effectively sit alongside these processes of modernisation and globalisation in reaching the stated goal of a European Union that is multilingual and multicultural while subscribing to effective management. 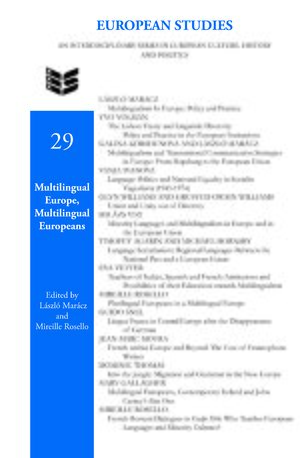