The present work deals with four themes that relate to the problem of aging and time. They include questions of allometric scaling, the novelty of experience, the change in perception of time with age, and the certainty of death. Featured in each of these themes is the prominence of time and the manner in which poetic, scientific, and technologic facets of each theme are interwoven. The overall argument serves to dispel the chronometric dominance of time versus its behavioral reality. 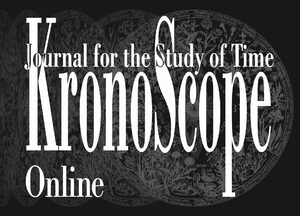 This paper addresses the persistent problem concerning the integration of physical (external) with psychological (internal) expressions of time. While the history of cosmological science demonstrates the fallacy of the conception of the physically privileged observational point in the Universe, I argue that it is just such a privileged position which characterizes the unitary nature of individual human consciousness. A rational, but flawed implication of this latter observation is that there is a unique spatiotemporal point within the brain at which reality is experienced. This flaw can be exposed through reference to the sensory simultaneity problem. Evidence indicates that since no such unique neural location exists, the brain finesses the issue of absolute timing at a sensory level by simply avoiding the problem of time-tagging such events altogether. While this finesse solves the simultaneity conundrum at a sensory level, I argue that the need for personal temporal continuity and the ability to outpace exogenous time by the projection of possible futures are solved elsewhere in the brain. A brief account of these latter properties is also presented.

On Time and the Origin of the Theory of Evolution
Author: Hancock

This paper presents a perspective upon how the confluence of three differing faces of time may have served as fundamental stimulus for Charles Darwin's formulation of the theory of evolution. The first temporal perspective is represented in Lyell's exposition of 'deep' geological time. This provided Darwin the temporal canvas upon which to conceive the possibility of the prolonged process of change upon which the conceptual basis of the theory of evolution is founded. The second face of time is epitomized in the linguistic treatment of temporality by the Polynesian culture, in whose environs Darwin found himself studying these respective processes of change. The linguistic and conceptual emphasis of this culture on the immediacy of a continual 'specious' present in perception and action provides evident examples of naming transformations of objects and entities well within the observational lifetime of a single individual. The juxtaposition of these conflicting, enormously 'deep' and exceptionally 'shallow' perspectives on time permits the step of insight on the process of change and consistency that became the bedrock of evolution itself. The final element of time, crucial to this whole process of understanding, was the necessary interval of duration for this synthesis to emerge. As a gentleman-scholar aboard the Beagle, Darwin possessed this boon of contemplative time in which to recognize and reconcile these vastly different yet eventually, deeply compatible views of time. Darwin's studious and painstaking development of evolution theory stands in stark contrast to the equivalent, but much more sudden brisance of understanding on behalf of Alfred Wallace whose own insight I shall argue is an exemplar of another form of time's influence.

Citizens of the World: London Merchants and the Integration of the British Atlantic Community, 1735-1785
Author: Hancock, David

In: The SHAFR Guide Online
Citizens of the World: London Merchants and the Integration of the British Atlantic Community, 1735-1785
Author: Hancock, David

On the Nature of Time in Conceptual and Computational Nervous Systems
Author: Hancock

The central premise of the present paper is that the spectacular failure to create a fully functional artificial intelligence results from a fundamental misunderstanding of the nature of time in relation to living systems. Unlike the sterile and purely chronometric conception that is subsumed in the central, clock referent system of most current computational machines, intelligence and especially human intelligence is erected on a tri-level, integrated system of temporal processing capacities. Here, I present the fundamental nature and manner of integration of these three, evolution-driven mechanisms which help life cope with the vagaries of uncertain but not totally unpredictable environments. The implications for the development of effective artificially-intelligent machines are discussed.