Clear All Modify Search
Download Citations
Problems with the Word Made Flesh: The Great Tradition of the Scientific Revolution in Europe
Author: Harold J. Cook

The Great Tradition of writing about what came to be called The Scientific Revolution developed in the mid-twentieth century and helped to shape what came to be termed “early modern” Europe. At least two fundamental structural elements of the framework were that a small group of independent minds had been set free to grasp new truths, and that rivalries among many groups in Europe never allowed “European civilization” to achieve homeostasis, thus continuing to encourage innovation in conditions of freedom. It is worth noting, however, that the first of these structural elements had religious overtones that were important in the early stages of the Cold War, and that the second placed innovation within a tradition of great texts rather than material culture and practice. Both changed the earlier conversation of the 1930s, which had been about political economies, connecting the new history of science to a history that offered to explain European superiority on the basis of the search for truth. Recent developments in global history, which are rooted in economic histories, challenge such a framing. The brand-name of The Scientific Revolution is common and will remain a useful short-hand, but its meaning requires major revision and should not be limited to the history of Europe.

In: Essays in the History of Therapeutics 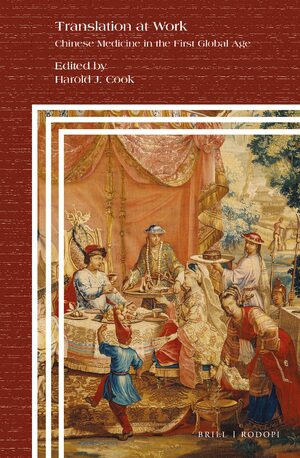 Translation at Work
Chinese Medicine in the First Global Age
Series: Clio Medica Online, Volume: 100and Clio Medica, Volume: 100
Editor: Harold J. Cook
During the first period of globalization medical ideas and practices originating in China became entangled in the medical activities of other places, sometimes at long distances. They produced effects through processes of alteration once known as translatio, meaning movements in place, status, and meaning. The contributors to this volume examine occasions when intermediaries responded creatively to aspects of Chinese medicine, whether by trying to pass them on or to draw on them in furtherance of their own interests. Practitioners in Japan, at the imperial court, and in early and late Enlightenment Europe therefore responded to translations creatively, sometimes attempting to build bridges of understanding that often collapsed but left innovation in their wake.

In: Translation at Work