The relationship between the Bible and Christianity, including Christian theology, is traditionally strong and undisputed; however, in Christian theology in Africa, as elsewhere, the status of the biblical texts is contested. A brief consideration of the Bible as 'canon' leads to a broader discussion of how the Bible has to a certain extent become a 'problem' in African theology also, both because of theological claims made about its status, and - and in conjunction with - its perceived complicity in justifying human suffering and hardship. The legacy of the Bible as legitimating agent is dealt with from the vantage point of the history of interpretation; but the latter also provides for a 'rehumanising' of Scripture. In the end, this article is also an attempt to explain some of the different views of the Bible's status in Africa, and to address and mediate the resulting conflict by attending to proposals to view the biblical canon as 'historical prototype', foundational document' - as scripture. A number of important aspects regarding the continuing role of the Bible in African theologies in particular, conclude the essay.

This contribution investigates the interplay between the recent (early 2008) spate of racist-marked events in South Africa and the Bible, starting with the way biblical references featured in subsequent discussions of the events. The use of the Bible and hermeneutics employed seems to be meshed into a broader array of ways in which "new South African" identities are negotiated, together with the tensions and resistance such identity-negotiations encounter (evoke and counter). Such presence of the Bible is further considered in light of the biblical documents' own tendency towards stereotyping in a manner true to first century-convention, with social identity theory providing the contours for discussing social categorisation and stereotyping. The paper is concluded with some deliberations on the intersections of South African racist discourse and biblical stereotyping.

In the post-Cold War and post-apartheid era in South Africa, global and local interest has arguably shifted from politics to economics. With an awareness of the current and formidable influence of globalisation on people's lives, Paul's letters should be reread with a view to identifying and formulating what emerges as his economic vision. This essay is a brief and preliminary investigation into how Pauline sentiments on economic matters could be brought into play with late twentieth-century globalisation.

In the post-Cold War and post-apartheid era in South Africa, global and local interest has arguably shifted from politics to economics. With an awareness of the current and formidable influence of globalisation on people's lives, Paul's letters should be reread with a view to identifying and formulating what emerges as his economic vision. This essay is a brief and preliminary investigation into how Pauline sentiments on economic matters could be brought into play with late twentieth-century globalisation.

The socio-historical context of the Pauline letters was dominated by the Roman Empire. But the Empire amounted to more than a material entity, and positing it as a negotiated concept is helpful for interpreting the Paul and Empire nexus. While areas of dissonance between Paul and Empire can be argued, the impact of Empire is discernible in other ways also in the letters. The lasting legacy of Paul’s imperium requires attention for Empire’s push and pull in his letters.

Who’s the Fool, and Why? Paul on Wisdom from a South African Perspective
Author: Jeremy Punt

South Africa is a young democracy but with colonial and Apartheid legacies fresh in the minds of many, the lasting impact and consequences of hegemony still tangible and measurable in a new, democratic dispensation with its own problems and concerns. This is the context within which Paul’s appeal for a different understanding of wisdom and appearance to insist on breaking through the conventions of the day (1 Cor 1:18–31) is considered. Since Empire largely defined wisdom in the first century, Paul’s rhetoric of foolishness can be interpreted as a critique of the imperial discourse of wisdom and power. But Paul simultaneously invoked a new discourse of power through his rhetoric which inter alia depended on scriptural appeal for endorsement or authority. A postcolonial optic enables one to see Paul’s discourse as mimicry, negotiating power as much with discursive Roman colonialism as with the recipients of his letters, and also with the Scriptures of Israel. Such use of discursive power and ambiguity resonates in interesting ways in the South African context.

The Bible and Multiscripturality in South Africa: Moving Beyond the Boon-or-Bane Debate1
Author: Jeremy Punt

A nominally Christian country, South Africa abounds with varieties of Christianity, all of which ultimately subscribe to the Bible as foundation document. Often, however, the appropriation of the Bible as a symbol is as much a problem as different and radically opposing interpretations of it: ownership of the Bible is widely contested and biblical hermeneutics is truly a site of struggle. However, not only is the need for an ecumenical approach to the Bible becoming increasingly pronounced, but ecumenicity will have to be broadened out to include multiscripturality as well. South Africa is simply also a multi-religious country with a number of other religions with their scriptures in close attendance. This demands a reappropriation of the Christian Bible as scripture amidst many other scriptures, and requires the development of an adequate, responsible and relevant multiscripturality. At the same time, it is necessary to move beyond over-simplified 'realist' options for conceptualising scripture and its role in religion. Perceiving scripture as activity rather than texts allows for investigating the interrelationship between scripture and identity, within a more adequate theology of scripture.

Postcolonial studies would seem to offer many advantages for academic and other discourses within and about post-apartheid South African society, including new, broad hermeneutical perspectives for biblical studies. Indeed, a number of current scholarly debates in South African biblical studies are related to the postcolonial paradigm: the tension between African versus Western readings, 'ordinary' versus 'trained' readings, and nationalist versus hybridical readings. juxtaposing some postcolonial biblical-critical voices and these debates is valuable in accounting for many of the important concerns that postcolonial readings raise, showing the significance and value of postcolonial studies, but is also important in the renewed attention to an appropriate ethics of interpretation in the biblical studies guild. 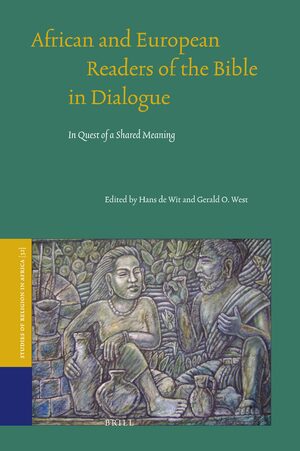 In: African and European Readers of the Bible in Dialogue