Clear All
Download Citations
Woman Rules Within
Domestic Space and Genre in Qing Vernacular Literature
Series:  Women and Gender in China Studies, Volume: 11
Author: Jessica Dvorak Moyer
In Woman Rules Within: Domestic Space and Genre in Qing Vernacular Literature, Jessica Dvorak Moyer compares depictions of household space and women’s networks in texts across a range of genres from about 1600 to 1800 C.E. Analyzing vernacular transformations of classical source texts as well as vernacular stories and novels, Moyer shows that vernacular genres use expansive detail about architectural space and the everyday domestic world to navigate a variety of ideological tensions, particularly that between qing (emotion) and li (ritual propriety), and to flesh out characters whose actions challenge the norms of gendered spatial practice even as they ultimately uphold the gender order. Woman Rules Within contributes a new understanding of the role of colloquial language in late imperial literature.
E-Book (PDF) 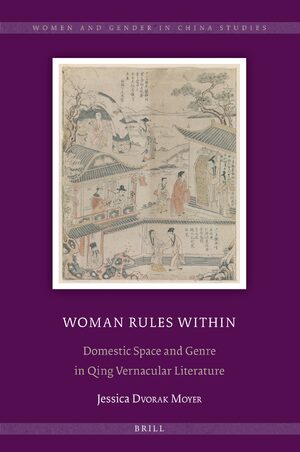 Woman Rules Within
Domestic Space and Genre in Qing Vernacular Literature
Series:  Women and Gender in China Studies, Volume: 11
Author: Jessica Dvorak Moyer
In Woman Rules Within: Domestic Space and Genre in Qing Vernacular Literature, Jessica Dvorak Moyer compares depictions of household space and women’s networks in texts across a range of genres from about 1600 to 1800 C.E. Analyzing vernacular transformations of classical source texts as well as vernacular stories and novels, Moyer shows that vernacular genres use expansive detail about architectural space and the everyday domestic world to navigate a variety of ideological tensions, particularly that between qing (emotion) and li (ritual propriety), and to flesh out characters whose actions challenge the norms of gendered spatial practice even as they ultimately uphold the gender order. Woman Rules Within contributes a new understanding of the role of colloquial language in late imperial literature.
E-Book (PDF)

This chapter compares three vernacular short stories to their classical source texts. The stories are from the anonymous eighteenth-century collection Parallel Words to Awaken Dreamers (Xingmeng pianyan 醒夢駢言), which translates and transforms selected tales from Pu Songling’s (蒲松齡, 1640–1715) collection Liaozhai’s Records of the Strange (Liaozhai zhiyi 聊齋志異). These stories illustrate the connection between the colloquial written idiom, the short story genre, and gendered domestic space. They use vernacular language to render the inner, private world of the household, and they use extensive detail about domestic architecture to depict the complex ritual and emotional relationships between their female characters. The linguistic and thematic characteristics of the vernacular short story make it uniquely suited to exploring the nexus of the everyday and commonplace, the concrete household space, and the tensions between affection (qing) and ritual propriety (li) in family relationships.

Both Liu Xiang’s Biographies (Lienü zhuan 列女傳) and Liaozhai’s Records of the Strange (Liaozhai zhiyi 聊齋志異) contain accounts featuring sagacious and loquacious women who act outside the normal bounds of the feminine sphere, and both the Expanded Biographies (Gujin lienü zhuan yanyi 古今列女傳演義) and Parallel Words (Xingmeng pianyan 醒夢駢言) contain vernacular expansions of these accounts. But the vernacular mode has different effects in each collection: Expanded Biographies criticizes and downplays its heroines’ unorthodox spatial practice, while Parallel Words celebrates the ways they act on behalf of the patriline’s absent or helpless men. The same celebration of expedient action by clever women marks Du Gang’s 杜綱 huaben collection Stories to Delight the Eye and Awaken the Heart (Yumu xingxin bian 娛目醒心編, 1792). Both Liaozhai and the two vernacular story collections present women who transgress spatial gender norms as virtuous. They contrast not only with the Expanded Biographies but also with depictions of intelligent women in other genres, like poetry and tanci. In the huaben genre, the vernacular mode and the fictional imagination intersect to present women’s expedient boundary crossings in convincingly fabricated detail, allowing for ethical reflection that is both daring and grounded in the everyday.

The earliest published sequel to Dream of the Red Chamber (Honglou meng 紅樓夢), Later Dream of the Red Chamber (Hou honglou meng 後紅樓夢, 1796), is a novel in 30 chapters, consciously smaller in scale than its 120-chapter parent novel. Through plot events and character interactions along with metafictional discussions of its own size and purpose, the sequel offers a meditation on boundaries and their function of containment. It is a paean to practical ritual moderation that nevertheless justifies and satisfies readers’ passionate, impossible engagement with the parent novel. The characters carefully shore up the architectural and ritual boundaries of the mansion and its social norms—but they present the textual boundaries of the book itself as fair game for metafictional free play. Thus, Later Dream engages conservatively with the negotiations between qing and li that characterize the domestic novel genre, while playing creatively with the stylistic aspects of the genre and its characteristic relationship to the book market. These stylistic choices enable the sequel’s revision of Dream of the Red Chamber’s vision of qing.

Chapter 5 The Ethos of Expansion in Dreaming Again of the Red Chamber
Author: Jessica Dvorak Moyer

The sequel Dreaming Again of the Red Chamber (Honglou fumeng 紅樓復夢, preface dated 1799), responds simultaneously to its parent novel, Dream of the Red Chamber (Honglou meng 紅樓夢) and to the scholar- beauty romance genre as a whole. In this sequel written by Chen Shaohai 陳少海 and edited by his sister Chen Shiwen 陳詩雯 (dates unknown), architecture fundamentally shapes Chen’s revision of affection, ritual propriety, and the novel genre. It sublimates sexual desire (yu 欲) completely to sentiment (qing 情), which it redefines as familial affection extended to a wide cast of male and female relatives, sworn kin, and household dependents. The sequel drives toward expansion, both in the scale of the marriage and kin networks it depicts and in the scale of the text itself: at 100 chapters long, it is the longest Dream sequel by far. Dreaming Again opposes qing to licentiousness through a narrative mode that emphasizes clarity and obsessively tidy detail rather than containment. It uses these stylistic choices, along with its characterization of Xue Baochai, to position itself explicitly against other popular fictional genres, notably the scholar-beauty romance.

Vernacular texts consistently privilege the working-out of competing ideals at the smallest and most particular scale in their characters’ lives, and they use a detailed, and intimate colloquial style as a means to negotiate those competing ideals in text. The vernacular mode allows authors to both flesh out and challenge the norms codified in other texts. But the colloquial language always operates within a matrix of other formal, thematic, and situational elements. The patterns within this matrix comprise readers’ horizons of expectations for particular genres; authors use those patterns of expectations to further their critical projects and to define and present their own books in relation to other texts. The stylistic medium of colloquial language appears particularly central to discussions of domesticity across genres that vary in size and degree of fictionality. Both fictional and nonfictional vernacular sources use expansive detail and thoughtful embellishment to create characters and spaces that embody the rich texture of daily life, and they imagine a correspondingly sincere and personal engagement with the text on the reader’s part. In the process, they emphasize the moral agency of the female characters who inhabit these spaces and the weightiness and complexity of ordinary, everyday actions.

Comparing textual depictions of women’s household relationships across multiple genres in Qing China shows that Qing authors’ choices of genre and language shaped discourse around a specific question: how women should integrate their emotional lives with the ritual demands of the household space. The texts studied here participate in distinct genres, and this participation, articulated in their choices about language and setting, defines their ideological positions within this larger cultural landscape. These texts use vernacular language deliberately to align themselves with the domestic everyday world. They use detailed descriptions of domestic architecture to establish the identities of characters and the relationships between them and to make their ideological underpinnings, particularly their attitudes to emotion (qing 情) and ritual (li 禮), concrete. These formal, thematic, and contextual elements combine to create recognizable genres that mediate between the social milieu and the individual text. This mediation emerges most clearly in the dynamic of critical response to a parent text, whether in rewriting or sequel writing; both rewritings and sequels use generic norms strategically to further their literary and ideological critiques. Genres provide tools to authors and editors negotiating social and ideological tensions in text.

Liu Xiang’s 劉向 (79–8 BCE) Collected Biographies of Women (Lienü zhuan 列女傳) founded an ongoing tradition of biographies of women. This chapter examines four editions of the Biographies dating from the 1580s to the 1680s, comparing their handling of biographical subjects whose loyalty to their brothers and fathers and nephews competed with their duty to their husbands and sons. For late imperial editors, these biographies present acute difficulties of interpretation and create a similar conflict of loyalties: between respect for the canonical source text and fidelity to contemporary mores that called for a woman to transfer her loyalty from her natal to her marital family. Late Ming editions of the Biographies use commentary and illustration to critique or to justify their heroines’ problematic actions. The early Qing Expanded Collected Biographies of Women Ancient and Modern (Gujin lienü zhuan yanyi 古今列女傳演義) uses a different strategy to engage with difficult passages. It transforms the Biographies into the vernacular yanyi genre, using rewriting and plot development along with commentary to justify its heroines’ most disturbing decisions. This transformation creates a comprehensive accommodation between the Han dynasty classic and late imperial mores.