I present here a key to reading the work of Jesuit thinker Francisco Suárez in the context of the plurality and complexity of modernity. I show the main configuration that defines modernity in its hegemonic version, as well as its limitations. From there, I propose how Suárez’s work can be understood from the perspective of its own Ignatian and Jesuit spiritual framework and in relation to the development of modernity. Although a dominant version of modernity has historically prevailed, modernity cannot be understood as a uniform process but one that has been articulated and expressed in different civilizing missions since the Renaissance. One modern way of responding to the socio-cultural challenges of the Renaissance was articulated by the Society of Jesus. I believe that in light of what I term an “Ignatian modernity,” we can better understand Suárez’s intellectual mission, its historical virtuality, and the possibilities marginalized by hegemonic modernity. 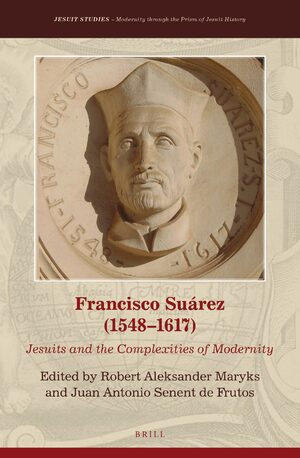 Francisco Suárez (1548–1617):
Jesuits and the Complexities of Modernity
Series: Jesuit Studies, Volume: 22
Editors: Robert Aleksander Maryks and Juan Antonio Senent de Frutos
This is a bilingual edition of the selected peer-reviewed papers that were submitted for the International Symposium on Jesuit Studies on the thought of the Jesuit Francisco Suárez (1548–1617). The symposium was co-organized in Seville in 2018 by the Departamento de Humanidades y Filosofía at Universidad Loyola Andalucía and the Institute for Advanced Jesuit Studies at Boston College.
Suárez was a theologian, philosopher and jurist who had a significant cultural impact on the development of modernity. Commemorating the four-hundredth anniversary of his death, the symposium studied the work of Suárez and other Jesuits of his time in the context of diverse traditions that came together in Europe between the late Middle Ages, the Renaissance, and early modernity.
E-Book