This article explores several dioceses in Tuscany—Arezzo, Fiesole, Lucca, Montepulciano, Siena, and Volterra—in light of the foundation of diocesan seminaries, to determine if a new corps of priests was produced and if that corps instituted major changes. Historians refer to post-Tridentine attempts to strengthen the faith and power of groups and institutions by such processes as education as the parallel trends of confessionalism and confessionalization. Since these dioceses represent different economic, educational, and demographic levels of development, the comparative study of quantitative and qualitative measures in these regions addresses the impact of educational changes in the parish clergy in a significant cross-section of late-sixteenth and seventeenth-century Tuscany. Even in dioceses which were wealthy and which supported seminaries, the institutions had little influence, and therefore the slow and spotty improvements in the parishes and dioceses did not result in the confessionalization of the region, although limited confessionalism did occur.

The Historiography of Jesuits in the Italian Peninsula and Islands before the Suppression
Author: Kathleen Comerford 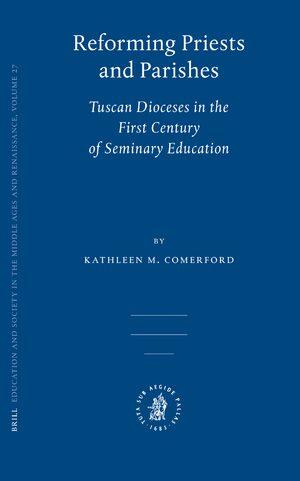 Reforming Priests and Parishes
Tuscan Dioceses in the First Century of Seminary Education
Series: Education and Society in the Middle Ages and Renaissance, Volume: 27
Author: Kathleen Comerford
Reforming Priests and Parishes consists of case studies of diocesan seminaries in the Grand Duchy of Tuscany and the Republic of Lucca from 1563-1660s. The major cases are Arezzo, Siena, Volterra and Lucca, and the dioceses and institutions are examined in their financial, educational, and religious milieux. Several other cases--Florence, Montepulciano, Pienza, and Pisa--are treated in less detail to provide contextual interpretative focal points.
Most of the seminaries have never been treated in English-language studies before, and no comparative study exists in any language. All of the case studies contain in-depth analysis of rare primary source material.
Hardback 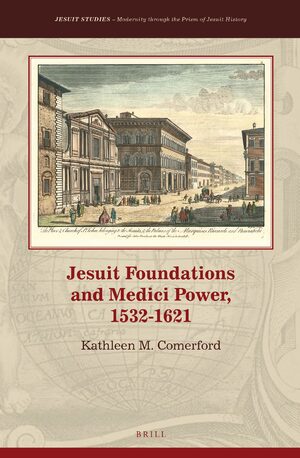 Jesuit Foundations and Medici Power, 1532-1621
Series: Jesuit Studies, Volume: 7
Author: Kathleen Comerford
Jesuit Foundations and Medici Power, 1532-1621 focuses on the cooperation between two new foundations, the last Medici state and the Society of Jesus, spanning nearly a century, concentrating on the Jesuit foundations in Florence, Siena, and Montepulciano. As the Medici built and centralized their power in the Grand Duchy of Tuscany, they sought to control both the civic and religious behavior of their citizens. They found partners in the Jesuits, whose educational program helped establish social order and maintain religious orthodoxy. Via a detailed investigation of both minor and major Italian Jesuit colleges, and of multiple Medici rulers, Kathleen M. Comerford provides insight into church/state cooperation in an age in which both institutions underwent significant changes.
E-Book

EUR  €142.00USD  $170.00
"The Care of Souls Is a Very Grave Burden for [the Pastor]": Professionalization of Clergy in Early Modern Florence, Lucca, and Arezzo
Author: Kathleen M. Comerford

Councils and bishops in late sixteenth- and early seventeenth-century Tuscan dioceses emphasized vocation and the cura animarurn in their efforts to reform the parish clergy after the Council of Trent. The desired criteria for pastoral behavior were relatively simple, yet in many instances conformity was elusive. While synods and visitations clearly articulate a vision of professionalism, and even state penalties for failures to achieve that vision, most parishes display instead a continuation of prior practices in several important areas, including very low levels of conformity with Tridentine and post-Tridentine reglations concerning education of priests and availability of up-to-date service books. Since the penalties were relatively small, and often did not produce any change, historians may conclude that seventeenth-century priests were not able to achieve the level of professionalization desired of them.

The European Jesuit Libraries Provenance Project is a census of books once owned by a Jesuit college or house in Europe between the 1550s and 1773. The suppression of the Society of Jesus led to the dispersal of its books, and the ejlpp uses both manuscript inventories and searches in modern libraries to locate the volumes once associated with the Society of Jesus. It is multimedia, digital humanities endeavor, supervised by Kathleen M. Comerford and employing student interns at Georgia Southern University.