While Classical Greek has a particularly rich complementation system, in later times there is a tendency towards the use of finite complementation. In this context, Cristofaro (1996) has claimed that the Classical opposition whereby the accusative and infinitive is used for non-factive complements, and ὅτι with the indicative and the accusative and participle for factive ones, is disappearing, ὅτι being used as a ‘generic’ complementiser. In this article, I investigate to what extent Cristofaro’s (1996) claim of the pragmatic neutralisation of complementation patterns can be upheld, and whether it could be claimed that a new pragmatic opposition, in terms of ‘register’, is being established. For this purpose, I turn towards documentary papyri, a corpus which is particularly fruitful for socio-historical investigations.

I present here a detailed appraisal of Luisa Amenta's Perifrasi aspettuali in greco e in latino, Origini e grammaticalizzazioni (2003). Amenta's study on verbal periphrases is a revised version of her Ph. D. thesis (1999), completed at the Università degli Studi di Roma Tre under the supervision of Prof. Dr. Marco Mancini. It off ers a diachronic and typological confrontation of periphrastic constructions in both Greek and Latin. I outline the contents of the book and give some critical remarks and suggestions for further research, concentrating on periphrases in Greek.

I analyze the use and development of perfect periphrases with the verbs “be” (εἰμί) and “have” (ἔχω) in Post-classical and Early Byzantine Greek. While their importance has often been stressed in the context of the restructuring of the verbal system (more in particular the loss of the synthetic perfect), they have not received an in-depth, corpus-based treatment yet. The approach adopted in this article builds on insights from recently developed ecological-evolutionary models, which recognize the fact that language change is a two-step process, consisting of innovation and propagation, and that multiple ‘ecologogical’ factors influence the spread of a construction through the population (what I discuss in terms of ‘register’).

The Syntax of the Periphrastic Progressive in the Septuagint and the New Testament
Author: Klaas Bentein

In this article, I discuss the use of the periphrastic progressive construction of εἰµί with present participle in the Septuagint and the New Testament. I argue that a broad distinction can be made between two main uses, called “durative progressive” and “focalized progressive.” In both cases, a number of syntactic frames can be specified in which the periphrastic construction occurs. I conclude the article by discussing the relationship between the Septuagintal and the New Testamental use of the periphrastic construction, arguing that while there are many similarities, this relationship should not be conceived of in terms of imitation, as some scholars have suggested.

Especially in the first half of the twentieth century, language was viewed as a vehicle for the transmission of facts and ideas. Later on, scholars working in linguistic frameworks such as Functional and Cognitive Linguistics, (Historical) Sociolinguistics and Functional Sociolinguistics, have emphasized the social relevance of language, focusing, for example, on linguistic concepts such as deixis, modality, or honorific language, or embedding larger linguistic patterns in their social contexts, through notions such as register, sociolect, genre, etc. The main aim of this article is to systematize these observations, through an investigation of how the central, though ill-understood notion of “social meaning” can be captured. The starting point for the discussion is the work that has been done in the framework of Systemic Functional Linguistics (SFL). This framework distinguishes “social” (“interpersonal”) meaning from two other types of meaning, and offers a typology of different types of contexts with which these different meanings resonate. In order to achieve a more satisfactory account of social meaning, however, I argue that we need to connect SFL to a theory of how signs convey meaning. The discussion is relevant for Ancient Greek in its entirety, but focuses specifically on Post-classical Greek: as a case study, I discuss five private letters from the so-called Theophanes archive (IV AD).

Historical Sociolinguistics: How and Why? Some Observations from Greek Documentary Papyri
Author: Klaas Bentein

Whereas initially texts from the past were given relatively little attention in sociolinguistic studies, nowadays historical sociolinguistics as a discipline has come to maturity, too. A central notion in (historical) sociolinguistics is that of context: regrettably, however, there is still no generally accepted theory of how context can be captured and related to language. One of the few frameworks that has attempted to provide a coherent and unifying account is the so-called Functional Sociolinguistic framework. In this article, I illustrate the potential of this model for the study of Post-classical and Byzantine Greek complementation. 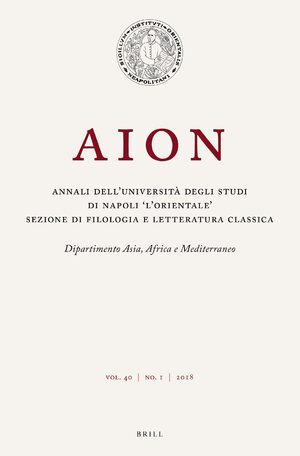