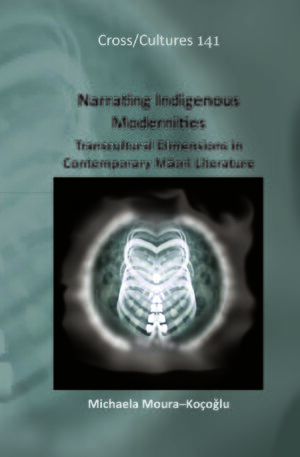 “Things are not exactly black or white in Aotearoa”: The Many Facets of Kiwi Identity
Author: Michaela Moura-Koçoğlu

Narrating Indigenous Modernities
Transcultural Dimensions in Contemporary Māori Literature
Series: Cross/Cultures, Volume: 141
Author: Michaela Moura-Koçoğlu
The Māori of New Zealand, a nation that quietly prides itself on its pioneering egalitarianism, have had to assert their indigenous rights against the demographic, institutional, and cultural dominance of Pākehā and other immigrant minorities – European, Asian, and Polynesian – in a postcolonial society characterized by neocolonial structures of barely acknowledged inequality. While Māori writing reverberates with this struggle, literary identity discourse goes beyond any fallacious dualism of white/brown, colonizer/colonized, or modern/traditional. In a rapidly altering context of globality, such essentialism fails to account for the diverse expressions of Māori identities negotiated across multiple categories of culture, ethnicity, class, and gender.
Narrating Indigenous Modernities recognizes the need to place Māori literature within a broader framework that explores the complex relationship between indigenous culture, globalization, and modernity. This study introduces a transcultural methodology for the analysis of contemporary Māori fiction, where articulations of indigeneity acknowledge cross-cultural blending and the transgression of cultural boundaries.
Thus, Narrating Indigenous Modernities charts the proposition that Māori writing has acquired a fresh, transcultural quality, giving voice to both new and recuperated forms of indigeneity, tribal community, and Māoritanga (Maoridom) that generate modern indigeneities which defy any essentialist homogenization of cultural difference. Māori literature becomes, at the same time, both witness to globalized processes of radical modernity and medium for the negotiation and articulation of such structural transformations in Māoritanga.
E-Book