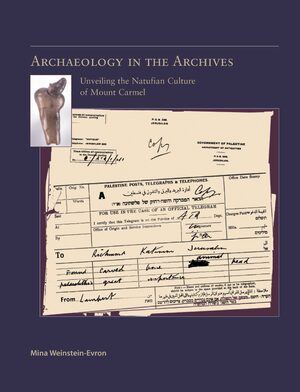 Archaeology in the Archives
Unveiling the Natufian Culture of Mount Carmel
Series: American School of Prehistoric Research Monograph Series, Volume: 7
Author: Mina Weinstein-Evron
Archival research has come to the fore in recent years as an invaluable source of information on the way Levantine prehistory developed. As she blows the dust from a vast array of archival documents, Mina Weinstein-Evron sets out to reconstruct the unveiling of the Natufian--a late Epipaleolithic Levantine culture on the threshold of the agricultural revolution. Able to rely on her own close involvement over the past 20 years in excavations of Natufian el-Wad, she skillfully retraces the steps of that supreme earlier excavator, Dorothy Garrod. By the same token, she rescues from historical oblivion the enigmatic figure of Charles Lambert and reveals the unique contribution he made to the study of el-Wad and Natufian culture. Combining new, unpublished archival documents with Dorothy Garrod's more familiar accounts, the author arrives at a coherent picture of el-Wad as a major long-term base camp and shows how it was situated in the cultural web of Natufian Mount Carmel, widely recognized today as one of the pivotal centers of this unique culture.
Hardback

Species diversity of epilithic cyanobacteria was studied in a 90 m deep prehistoric el-Wad cave eroded in Cenomanian limestones of Mount Carmel, Israel. The degree of illumination is the most variable index throughout the cave, whereas humidity and temperature vary moderately. In a number of sites inside the cave dripping water occurs due to filtration of rain water. In el-Wad cave 42 species from 20 genera of blue-green algae were found. The share of coccoid forms decreased and filamentous (especially oscillatorial) ones increased from the entrance to the end of the cave. Intensity of light was the governing factor for distribution of cyanobacteria in el-Wad cave; the availability of dripping affected it to a lesser extent due to the constantly high humidity of the air. Diversity of species composition and taxonomic spectrum of cyanophytes was reduced from the entrance to the end of the cave, covarying positively with darkness stress.