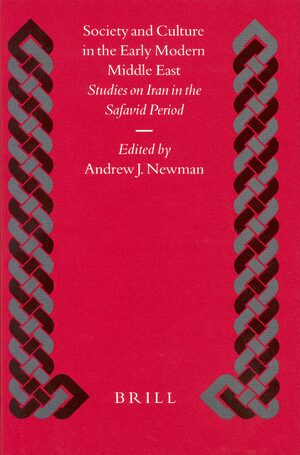 Society and Culture in the Early Modern Middle East
Studies on Iran in the Safavid Period
Series: Islamic History and Civilization, Volume: 46
Author: Newman
The volume comprises a collection of 20 of the 43 papers presented at the Third International Round Table on Safavid Persia, held at the University of Edinburgh in August, 1998 and edited by the Round Table's organiser. The Third Round Table, the largest of the series to date, continued the emphasis of its predecessors on understanding and appreciating the legacy of the Safavid period by means of exchanges between both established and 'newer' scholars drawn from a variety of fields to facilitate an exchange of ideas, information, and methodologies across a broad range of academic disciplines between scholars from diverse disciplines and research backgrounds with a common interest in the history and culture of this period of Iran's history.
Hardback

The Summa Perfectionis of Pseudo-Geber
A Critical Edition, Translation, and Study
Series: Collection de Travaux de l'Académie Internationale d'Histoire des Sciences, Volume: 35
Author: Newman
Alchemy was a subject of no small controversy in the Middle Ages. To some scholastics, alchemy seemed to arrogate the power of divinity itself in its claim that man could replicate the products of nature by means of art; others viewed alchemy as a pure technology, unworthy of inclusion in a curriculum devoted to the study of scientiae.
The Summa perfectionis of Pseudo-Geber, written around the end of the 13th century as a defense of the art, became 'the Bible of the medieval alchemists,'and was still being used as late as the 17th century. The present work contains a critical edition, annotated translation, and commentary of the Summa.
Hardback