In Cappadocian and Pharasiot, the two main members of the inner Asia Minor Greek dialect group, the head nouns of NPs found in certain syntactic positions are marked with the accusative if the relevant NPs are definite and with the nominative if the NPs are indefinite. This differential case marking (dcm) pattern contrasts with all other Modern Greek dialects, in which the accusative is uniformly used in the relevant syntactic positions. After revisiting recent proposals regarding the synchronic status of dcm in Cappadocian and Pharasiot, I show how the two dialects developed this ‘un-Greek’ feature in the model of Turkish, which marks the head nouns of direct object NPs with an accusative suffix only if they take a specific reading leaving non-specific direct object NPs unmarked. I subsequently trace the diachronic trajectory of this contact-induced innovation within the two dialectal systems, seeking to explain why dcm was gradually lost in Cappadocian but preserved in Pharasiot. 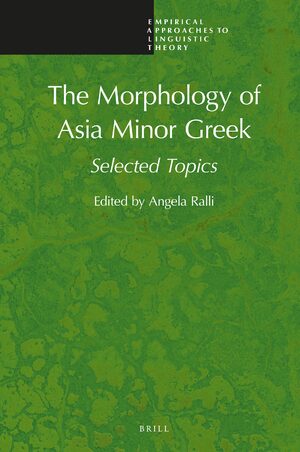 In: The Morphology of Asia Minor Greek