Research on children's religious understanding has recently focused on outlining how and when children develop a variety of religious concepts, however there is a noticeable lack of research into children's understanding of religious rituals. We present three studies exploring children's developing understanding of religious rituals. In Experiment 1, children ages 5 to 11 were told stories about novel actions that were done for functional reasons or ritual reasons. Older children were more flexible than younger children about the functional actions, and all children remained generally inflexible about the ritual actions, claiming that it would be somewhat bad to change how rituals are done. In Experiment 2, children ages 6 to 11 were asked about the flexibility of a familiar ritual (i.e., baptism) and a familiar functional action (i.e., bath). In this case, children of all ages were far more flexible about the functional actions than the ritual actions. In Experiment 3, children ages 4 to 12 were asked about the efficacy of a baptism if the pastor performing the baptism performed the wrong actions. The older children were more likely than younger children to claim that the baptism could still work even if the pastor made mistakes.

The current study examined (a) the impact of religious socialization practices and parents’ concepts on the development of an abstract religious concept (i.e., God) in young children, and (b) whether or not children’s socio-cognitive ability moderates the relationship between their religious concept and sources of information about the concept. 215 parent-child dyads from diverse religious backgrounds (Protestant Christian, Roman Catholic, Muslim, non-affiliated) participated. Children were between the ages of 3.52 and 6.98 years of age (M = 4.770, SD = .767). Four main findings emerged from this study. First, children conceptualized God as more humanlike than their parents did. Second, younger children were more likely to have a humanlike conception of God than older children. Third, parents’ concept of God and children’s concept of God had a stronger relationship when the child’s mental-state reasoning was more accurate. Fourth, the frequency of children’s engagement in religious practices was unrelated to children’s concept of God after controlling for child’s age. Taken together, these findings lend support for the view that social cognition is an important factor in young children’s acquisition of cultural information about abstract entities.

Who Cares If I Stand on My Head When I Pray? Ritual Inflexibility and Mental-State Understanding in Preschoolers
Authors: Nicholas J. Shaman, Anondah R. Saide, Kirsten A. Lesage and Rebekah A. Richert 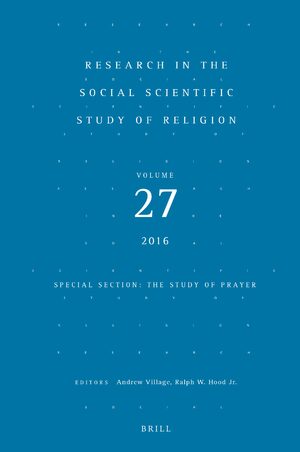 In: Research in the Social Scientific Study of Religion, Volume 27

In: Research in the Social Scientific Study of Religion, Volume 27