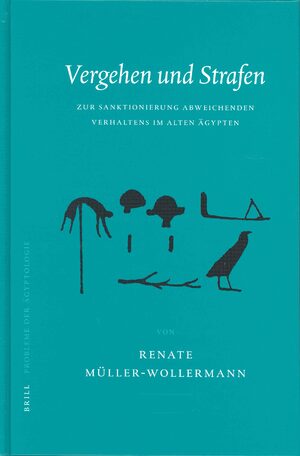 Vergehen und Strafen
Zur Sanktionierung abweichenden Verhaltens im alten Ägypten
Series: Probleme der Ägyptologie, Volume: 21
Author: Renate Müller-Wollermann
This book explores for the first time deviant behaviour in ancient Egyptian society and society's sanctions in response to it; theories derived from the field of anthropology and sociology of law are taken into consideration. Full use is made not only of juridical texts, but all varieties of textual and archaeological sources. All forms of deviant behaviour are described and classified primarily according to their target of the action. Then follows a discussion of all kinds of sanctions, both negative and positive. In general, the classification of crimes and punishments is based on different criteria to those used in Roman or modern law. E.g., the use of force did not play a decisive role and imprisonment did not exist as a form of punishment.
Hardback

Geschenke und Steuern, Zölle und Tribute
Antike Abgabenformen in Anspruch und Wirklichkeit
Series: Culture and History of the Ancient Near East, Volume: 29
Editors: H. Klinkott, S. Kubisch and Renate Müller-Wollermann
This book examines modes of economic contribution in the ancient world through taxes, tribute, or so-called gifts. Specialists in the field of the ancient Near East, Egypt, classical Greece, Rome, and Israel, joined by an economic anthropologist, present a fresh evaluation of the textual and archaeological evidence. A prime question explored is the extent to which these disparate sources complement or contradict each other.
State-imposed transactions were often recorded with an ideological bias, much dependent on whether the donors and recipients were viewed as in- or outsiders. The present interdisciplinary approach supplies the basis for the ancient economic terminology of contribution, taking into account the specific cultural context, the language of ‘international’ policy, and the correlation between modern and ancient termini.
E-Book