Rhabditidoides humicolus n. sp. is described and illustrated from arthropods associated with decaying tissue from the crown shaft of a living spindle palm, Hyophorbe verschaffeltii, in southern Florida, USA. In addition to its generic character, i.e., the arrangement of male genital papillae, ⟨v1, v2, v3d, CO, v4, (ad, v5, ph, v6), (pd, v7)⟩, the new species is characterised by its small stomatal flaps, a secretory pore-like opening, a pair of deirids, two pairs of post-deirids and small subventral vulval papillae located just anterior to the vulva. Besides those newly found characters, there are only a few typological differences between R. humicolus n. sp. and several previously described species in the genus. However, based on the biological characters, e.g., gonochoristic reproduction, association as dauers with the crane fly, Limonia (Rhipidia) schwarzi (Diptera: Limoniidae), millipedes, an immature cockroach, and staphylinid beetle adults, and distribution in southern Florida, the new species was considered to be different from others in the genus.

A new Acrostichus species is described based upon molecular sequence profiles and hybridisation testing. The new species, A. palmarum n. sp., had been previously described as local isolates (strains) of A. rhynchophori, i.e., an isolate recovered from Rhynchophorus cruentatus from South Florida (culture code RGD193) was designated as the type strain of A. rhynchophori, and other Central and South American strains (RGD194-196), recovered from R. palmarum were considered as conspecific regional isolates. However, additional sequencing of ribosomal DNA loci (near full-length of small subunit, full length of internal transcribed spacer and D2-D3 expansion segments of large subunit) and partial mitochondrial cytochrome oxidase subunit I gene and hybridisation testing suggested the independent species status of RGD194-196. Furthermore, two strains of A. palmarum n. sp., RGD194 and RGD195, showed partial reproductive isolation from each other, i.e., the fecundity of F1 progeny was obviously low, suggesting that geographical isolation within a widely-distributed species is occurring. 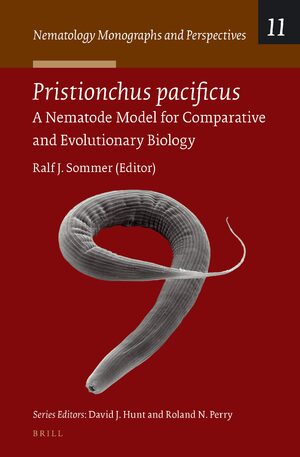 Two commensal associates of bees, Allodiplogaster josephi n. sp. from the Dufour’s gland of a cellophane bee (Colletes thoracicus) from Maryland, USA, and A. seani n. sp. from the abdominal glands of an andrenid bee (Andrena alleghaniensis) from New York, USA, are described and illustrated. Both species were collected as dauers from their respective hosts and cultured on bacteria on tryptic soy broth (TSB) or NGM agar. Allodiplogaster josephi n. sp. and A. seani n. sp. are morphologically closer to each other than to other species of Allodiplogaster, which was recently revised to include 37 valid species. However, the two new species are distinguished by reproductive isolation, shape of the spicule manubrium, host associations and molecular characters, the latter in sequences of the near-full length small subunit (SSU) rRNA gene, D2-D3 expansion segments of the large subunit (LSU) rRNA gene and partial mitochondrial COI. Morphological characterisation was supplemented by scanning electron microscopy (SEM), which revealed furcation of both v5 and v6 male genital papillae, consistent with previous reports for species of the henrichae group of Allodiplogaster.

The type specimens of five Bursaphelenchus species described by Massey, i.e., B. bestiolus, B. corneolus, B. elytrus, B. newmexicanus and B. wilfordi, were re-examined and photo-documented to update their descriptions in light of a contemporary understanding of the genus. The presence of a lateral field, basal swelling of stylet, P1 ventral single papilla of males and a pair of three-celled structures in females, which were not described or mentioned in the original descriptions, were observed, although the number of lateral incisures were not clarified because of sample condition. Within these five species, the intrageneric groupings of B. bestiolus and B. wilfordi had been unclear. In the present study, because of newly observed morphological characters, B. bestiolus is considered to belong to the hofmanni-group, and is close to B. talonus and B. rufipennis. These three species form a species complex and are distinguished from each other only by female tail morphology. The species status of B. wilfordi is still unclear, although, based on spicule morphology and structure and arrangement of genital papillae, we consider it to belong to the hofmanni-group, close to B. parvispicularis, B. paraparvispicularis and B. osumiana. However, female characters of B. wilfordi are also similar to members of the cocophilus-group and Parasitaphelenchus. Re-isolation and molecular identification are necessary to confirm the status of these species. By contrast, the affiliations of B. corneolus with the hofmanni-group and B. elytrus and B. newmexicanus with the eggersi-group were confirmed. Based upon its morphological traits, B. corneolus is close to B. gerberae and B. paracorneolus, and is distinguished from these species by its spicule morphology, female tail morphology and female post-uterine sac length. However, male specimens of B. corneolus were not available for the present study and confirmation is necessary. Bursaphelenchus elytrus is similar to B. tusciae and is distinguished from it by its spicule (condylus) morphology and excretory pore position. Bursaphelenchus newmexicanus is close to B. glochis and is distinguished from it mostly by morphometrics and spicule (condylus) morphology. However, morphometrics usually vary among individuals and populations of a species, necessitating morphometric and molecular comparisons of more isolates (strains) in order to clarify specific status.

Basilaphelenchus persicus n. gen., n. sp. is described and illustrated based on morphological and molecular phylogenetic studies. The new genus belongs to the family Aphelenchoididae and is characterised mainly by the small body size of females (297-393 μm) and males (304-331 μm), high cephalic region in both sexes, fine 5.5-7.8 μm long stylet that is barely visible in mounted specimens yet clear in fresh individuals, stylet with a linear conus and weak shaft ending in three elongate, posteriorly directed, knobs, small spherical metacorpus with posteriorly located (at 72-75% of metacorpus) weak but distinct valve, monodelphic-prodelphic reproductive system with a long post-vulval uterine sac containing large rounded sperm cells, a vulva lacking any flap apparatus, conical tail of female usually ventrally bent at tip and male tail ventrally bent as in the female, lacking the P1 supplement, but with three pairs of caudal papillae, and small arcuate spicules with rounded condylus and small pointed rostrum. The new genus is similar to both Tylaphelenchus and Pseudaphelenchus in the possession of a raised cephalic region and a small spherical metacorpus, placing it in the subfamily Tylaphelenchinae. It is also typologically similar to Aphelenchoides. Molecular phylogenetic studies using both SSU and LSU rRNA gene sequences (both partial) revealed that the new genus formed a robustly supported sister clade with Pseudaphelenchus spp. and had a basal placement to this clade and, probably, to all other aphelenchoidids. Tylaphelenchus grosmannae is transferred to the new genus as B. grosmannae n. comb. and A. christinae n. comb. (= T. christinae) is proposed. The taxonomic status of Tylaphelenchus is discussed and T. sinodendroni n. comb. (= A. sinodendroni) proposed.

During an experimental host-plant survey for the invasive redbay ambrosia beetle, Xyleborus glabratus, in Homestead, Florida, it and three native species of ambrosia beetle, Xyleborus affinis, X. volvulus and Xyleborinus gracilis were found to be associated with a Bursaphelenchus species. This nematode species, isolated from ambrosia beetles from the tribe Xyleborini, was cultured on Monilinia fructicola or Botryotinia fuckeliana for further study and was determined to be new to science and a putative sister species to B. kiyoharai because of two apomorphic characters in males, viz., possession of a tail spike vs the typical bursal flap, and the apparent absence of the P1 ventral single papilla, both typically plesiomorphic characters for the genus. Additionally, B. kiyoharai is associated with X. serriatus suggesting that the host and microbiome associations that are shared between these two species, both of which are carried by ambrosia beetles, may have ecological and biological significance in their evolution and lineage radiation. Molecular phylogenetic analyses of the near-full-length small subunit (SSU: 18S) and the D2/D3 expansion segments of the large subunit (LSU: 28S) confirmed that B. penai n. sp. is very closely related to B. kiyoharai which is a member of the B. fungivorus clade that includes B. thailandae and B. willibaldi. Bursaphelenchus penai n. sp. and B. kiyoharai both share very similar overall spicule morphology with the B. fungivorus clade. The new species is described and can be typologically differentiated from B. kiyoharai by the position of the hemizonid and excretory pore and its different geographical and host associations.

During a 2016 survey of the nematode associates of the native palmetto weevil, Rhynchophorus cruentatus, and the recently introduced West Indian sugarcane weevil, Metamasius hemipterus (Coleoptera: Curculionidae), from southern Florida, a new species of Acrostichus was cultured from a single dissected R. cruentatus from Fort Pierce, FL, USA. Morphological and molecular studies showed that it was new to science and it is described herein as A. floridensis n. sp. The new species is characterised by its male tail characters, spicule morphology with rounded manubrium separated from other parts by clear constriction, smoothly ventrally curved blade, slightly dorsally recurved and pointed tip, more or less straight gubernaculum with widely rounded anterior end and a triangular (arrowhead-like) appendage at the distal tip, and the arrangement of male genital papillae, ⟨(v1, v2), v3 / v4, ad, ph, (v5, v6, v7, pd)⟩. In addition to A. floridensis n. sp. and the previously described nematode associates of R. cruentatus, i.e., A. rhynchophori, Teratorhabditis palmarum and Mononchoides sp., we recovered a putative new species of Demaniella and a new association record with Rhabditidoides humicolus and Diplogastrellus metamasius in Homestead, FL. Dissections and subsequent culturing attempts with M. hemipterus revealed the previously described nematode associates of Caenorhabditis angaria and D. metamasius as well as a new association with R. humicolus in Homestead, FL, USA.

A Bursaphelenchus species was isolated from an ambrosia beetle, Xyleborus seriatus, during a biodiversity survey of entomophilic nematodes in a conserved forest in the Shirakami mountain range, Aomori, Japan. The nematode has several interesting morphological characters that do not fit the morphological definition of Bursaphelenchus, e.g., males have a tail spike instead of a bursal flap and lack the P1 ventral single papilla, and females have a very long and tapering tail (filiform). The molecular phylogenetic status of the new species inferred by the near-full-length small subunit (SSU: 18S) and the D2/D3 expansion segments of the large subunit (LSU: 28S) suggests, however, that the nematode is included in the B. fungivorus group, and is most closely related to B. thailandae and B. willibaldi. Despite these unique morphological characters, its spicule morphology, which is almost identical to that of B. gonzalezi, B. thailandae and B. willibaldi, and vulval structure, i.e., lacking a vulval flap, are in accordance with the molecular phylogenetic status of the nematode. The new species, which shows evidence of secondary loss of the bursal flap and P1 papilla, is described herein as B. kiyoharai n. sp. The typological descriptions of the genus and Parasitaphelenchinae were reconsidered and the taxonomic framework of the Aphelenchoidinae and Parasitaphelenchinae revised. Bursaphelenchus asiaticus n. comb. is proposed for Ruehmaphelenchus asiaticus.