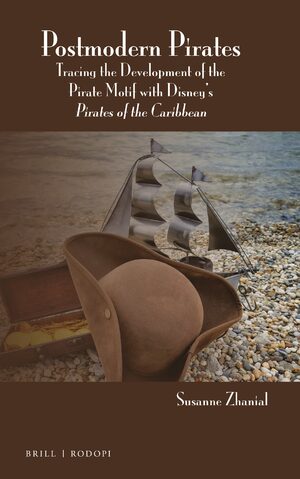 Mainstream blockbusters have often been eschewed by academic criticism, although they have a huge impact on popular culture. This book uses postmodern film theories and a mainstream blockbuster series, Disney’s Pirates of the Caribbean, to investigate the development of the pirate motif in literature and film over the last two hundred years.

The chapter first offers a brief introduction to postmodernism as an aesthetics and the development of Hollywood’s film industry in the late twentieth and twenty-first century. It compares and combines the main critical arguments of leading postmodern cultural critics with contemporary film theory, and develops a set of four aesthetic criteria to identify a movie as postmodern. The chapter highlights that postmodern elements are used in independent movies as well as in the tentpole hits of the big conglomerate studios, and therefore, mainstream blockbusters such as Walt Disney’s Pirates of the Caribbean, provide important insights into the study of Hollywood’s contemporary postmodern cinema.

Disney’s Pirates of the Caribbean is analysed as an example of a postmodern blockbuster movie by successively applying the four postmodern criteria defined in the theory chapter and illustrating each criterion with a number of examples from the movies. Furthermore, the economic considerations and franchising are shown to be an essential part of Hollywood’s contemporary blockbuster machinery.

This chapter focuses on the pirate characters in Disney’s movie series. It highlights how Disney rewrites, and thus revives, the pirate motif for the twenty-first century. After a detailed analysis of the main pirate, Jack Sparrow, and its proclaimed uniqueness, the chapter compares and contrast Jack to the Gothic pirate villains and their crews, before turning to the role that love relationships, desires, and romance play in the movie series. The chapter also reads Pirates of the Caribbean alongside other postmodern movie series, most notably Star Wars, to reveal how they rely on the same character archetypes and power relations in order to appeal to a worldwide audience.

As a conclusion to the first part and its analysis of Disney’s Pirates of the Caribbean, this chapter stresses the importance of reading Disney’s movie series both in the context of Hollywood’s contemporary film industry and as postmodern. Both aspects help to explain the enormous popularity of the franchise.

The second part of the book traces the development of the pirate motif in both British literature and Hollywood film from the early nineteenth to the twenty-first century. Each chapter concentrates on one major period in order to show how the motif was adapted by authors to fit their cultural background and current aesthetics. In addition, every chapter closes with a comparative subchapter that highlights which elements of the period are reworked in Disney’s Pirates of the Caribbean.

This chapter illuminates the transition from historical travel reports to fictional representations of piracy, and highlights the difficulties of drawing a clear line between the two. It is also shown that Pirates of the Caribbean consciously plays upon this ambiguity when alluding to historical facts and figures.

Starting with an analysis of Romantic pirate stories, among them Lord Byron’s The Corsair and Walter’s Scott The Pirate, the chapter traces the transformation of the pirate from an outlaw rebel in adult literature into the cutthroat villain of juvenile fiction. The analysis of nineteenth-century pirate fiction includes, among other books, the two classics of British pirate fiction: Robert Louis Stevenson’s Treasure Island and James Matthew Barrie’s Peter Pan. The representation of the pirate in early twentieth century children’s literature is illustrated by discussing Richard Hughes’ A High Wind in Jamaica and Arthur Ransome’s Swallows and Amazon series. The chapter concentrates its analysis on the representation of the pirate captain and on the evaluation of piracy in general, but also shows how the genre – already long before Disney’s Pirates of the Caribbean – has relied on intertextuality and on borrowing elements from earlier texts. At the end of the chapter, Jack Sparrow’s indebtedness to his Romantic predecessors and Long John Silver is investigated. Furthermore, the chapter tries to illuminate the origin and development of traits and features nowadays commonly associated with the pirate motif, like the parrot, pieces of eight, and treasure maps.