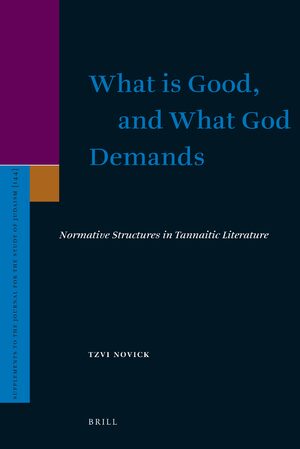 What is Good, and What God Demands
Normative Structures in Tannaitic Literature
Series: Supplements to the Journal for the Study of Judaism, Volume: 144
Author: Tzvi (Michael) Novick
The normative rhetoric of tannaitic literature (the earliest extant corpus of rabbinic Judaism) is predominantly deontological. Prior scholarship on rabbinic supererogation, and on points of contact with Greco-Roman virtue discourse, has identified non-deontological aspects of tannaitic normativity. However, these two frameworks overlook precisely the productive intersection of deontological with non-deontological, the first because supererogation defines itself against obligation, and the second because the Greco-Roman comparate discourages serious treatment of law-like elements. This book addresses ways in which alternative normative forms entwine with the core deontological rhetoric of tannaitic literature. This perspective exposes, inter alia, echoes of the post-biblical wisdom tradition in tannaitic law, the rich polyvalence of the category mitzvah, and telling differences between the schools of Akiva and Ishmael.
E-Book