In: Word and Music Studies 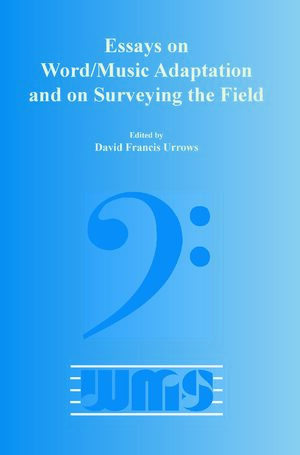 In: Essays on Word/Music Adaptation and on Surveying the Field

Cultural Functions of Intermedial Exploration
Series: Internationale Forschungen zur Allgemeinen und Vergleichenden Literaturwissenschaft, Volume: 62
Editors: Erik Hedling and Ulla-Britta Lagerroth
This collection of 19 essays is the first one devoted to function-oriented analyses of intermedial interrelationships in literature, art, music, and film. The contributors — among others, Werner Wolf, James Heffernan, Walter Bernhart, Siglind Bruhn, Claus Clüver, Valerie Robillard, and Tamar Yacobi — are leading international scholars in the field of intermediality. The common basis of the essays in this volume — ranging from intermedial studies of medieval liturgical practices, early cinema, modernist art, ekphrasis, music and literature, art and literature, film and literature, hymns, and pop music, to the musical and technological aspects of Concrete poetry — is the ambition to pay attention to the cultural contexts that enhance the significance of these intermedial works and trends under examination. Since the contributions cover different types of intermedial endeavours from various periods and times, a kind of historicizing perspective is outlined. So, in pursuit of a still lacking coherent historical survey of cultural functions of intermediality, this volume might be recognized as a step towards such a Funktionsgeschichte for intermedial exploration.
Paperback

Interart Poetics
Essays on the Interrelations of the Arts and Media
Series: Internationale Forschungen zur Allgemeinen und Vergleichenden Literaturwissenschaft, Volume: 24
Editors: Ulla-Britta Lagerroth, Hans Lund and Erik Hedling
In this anthology are gathered 28 essays, devoted to the interrelations of the arts and media. They present together the current state of the emerging field of Interart Studies. The contributors — Stephen Greenblatt, Claus Clüver, Erika Fischer-Lichte, John Neubauer, Steven Paul Scher, Walter Bernhart, Ulrich Weisstein, Eric T. Haskell, Eric Vos, Thomas Elsaesser, among others — are leading international scholars in the fields of Art History, Literary Criticism, Musicology, Film, Theatre and Media Studies. In challenging ways they promote interdisciplinary strategies in the study of the traditional arts: dance, literature, music, painting, sculpture, theatre etc, as well as of the modern media: film, TV, video, computer-generated arts, etc.
The essays collected engage in a broad perspective of topics, approached from varying theoretical, methodological or ideological viewpoints. No single thread runs through the diversely conceived essays, yet it is evident that what all contributors appear to envision is the importance today of investigations into the problems of what might be called the interart — or intermedia — discourse. Aimed at university teachers, scholars, students and even artists, this book will meet the demands from those interested in modern modes of interart and intermedia analysis.
Hardback