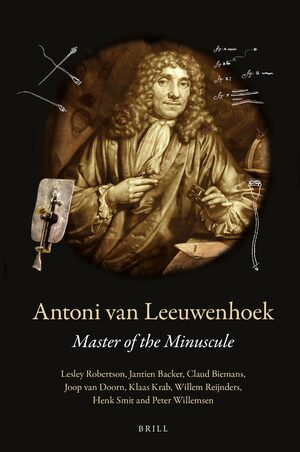 Antoni van Leeuwenhoek
Master of the Minuscule
Authors: Lesley Robertson, Jantien Backer, Claud Biemans, Joop van Doorn, Klaas Krab, Willem Reijnders, Henk Smit and Peter Willemsen
In Antoni van Leeuwenhoek, Master of the Minuscule, the Father of Microbiology is presented in the context of his time, relationships and the Dutch Golden Age. Although he lacked an academic education, he dedicated his life to investigating the microscopic world using handmade, single-lensed microscopes and magnifiers. An expert observer, he planned experiments and designed equipment to test his theories. His pioneering discoveries included blood cells, protozoa, bacteria and spermatozoa, and resulted in an international reputation among the scientific and upper classes of 17th and 18th century Europe, aided by his Fellowship of the Royal Society of London.

This lavishly illustrated biography sets his legacy of scientific achievements against the ideas and reactions of his fellow scientists and other contemporaries.