shout praises in one accord. But others are so impervious that they would be thought to differ not at all from the lifeless seats on which they sit. Still, some are so estranged that they even depart and leave the spectacle behind, and what is more cover their ears with both hands, lest some remnant 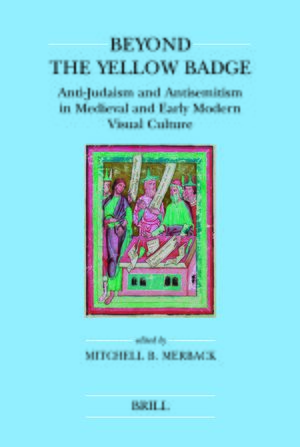 Beyond the Yellow Badge
Anti-Judaism and Antisemitism in Medieval and Early Modern Visual Culture
Reihe: Brill's Series in Jewish Studies, Band: 37
HerausgeberIn: Mitchell Merback
In thirteen essays by leading art historians, and a critical introduction by the editor, Beyond the Yellow Badge seeks to reframe the relationship between European visual culture and the changing aspect of the Christian majority’s negative conceptions of Jews and Judaism during the Middle Ages and early modern periods. By situating their subjects within a broad continuum of historical and critical issues, the authors inquire into such questions as the shifting politics of toleration and intoleration; the role played by anti-Judaic legends in the formation of Christian cults; the role of positive evaluations of Hebrew, Jewish learning and Christian hopes for Jewish conversion; and the transformation of religious anti-Judaism into its modern racial and nationalistic counterparts. The book will be of special interest to art historians, cultural historians, students of Christian theology and Jewish history, and to educated general readers.

the Jews. The king attempts to defile the Jerusalem temple (1:8-15), publicly disgraces the Jews (2:27-30), and attempts to have their population trampled to death by elephants in a great spectacle (5:1-6:20). Philopator is described in the text as “wicked” (δυσσεβής, 3:1), “filled with wrath and

-54). Line 60 uses 8?apa to describe the "spectacle" of the athletic contests. The consistent focus on athletic themes makes it far more likely that the "little gate" of line 14 belongs to an ath- letic stadium or gymnasium rather than a theater." The word "the- ater" itself (9Éa'tpoy) was a term often used

Classica Et Rabbinica I: the Bull of Phalaris and the Tophet
AutorIn: Gideon Bohak

£J0ai K£X£iJai (i.e., Hadrian), etc.; for the legend of Eustathius, see 0, ford Dictionary of Byzantium, vol. 2, 753; for an illuminated manuscript depicting the execution inside the bull, see ibid. vol. 3, 1576. 2z The issue of death as a public spectacle has received a great deal of attention

THE ROMAN CHARACTER OF FUNERALS IN THE WRITINGS OF JOSEPHUS
AutorIn: John Levison

were beating their breasts and wailing for him” (23:27); “And when all the crowds who had gathered there for this spectacle saw what had taken place, they returned home, beating their breasts” (23:48). This custom was also depicted on funerary reliefs. A marble relief from approximately the same period

Stelae, Elephants, and Irony: The Battle of Raphia and Its Import as Historical Context for 3 Maccabees
AutorIn: Patrick J. O’Kernick

the miraculous deliverance of the Jews from before the face of 500 armed and drunken elephants. Ptolemy orders his elephant-keeper, Hermon, to prepare the elephants to trample the Jews three times. In the first two cases, God intervenes so that the spectacle is postponed. In the third case, the

The Place of the "Wild Beast Hunt" of Sib. or. 3,806 in Biblical and Rabbinic Tradition
AutorIn: K. William Whitney

will be allowed to witness the eschatological spectacle staged by God. The threat to the life of the Jewish community posed by Jewish participation in the circus games spurred the writer of this text to adapt the tradition of an eschatological kynegesialkynegia. He does so by recourse to a once

The Representation of Theatricality in Philo's Embassy to Gaius
AutorIn: Ellen Muehlberger

—or modern meta-theater), it entails a reversal of the normal one-way direction of the spectators’ gaze, so that they know them- selves watched by the object of their view and respond accordingly even as the categories of spectacle and spectator lose all stability. 5 4) Bartsch, Actors in the Audience , 2