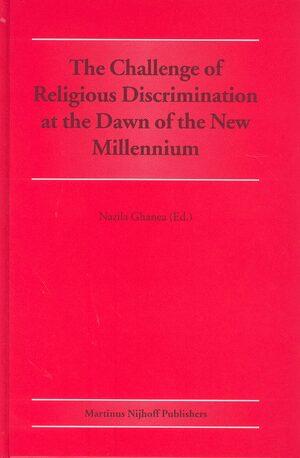 The Challenge of Religious Discrimination at the Dawn of the New Millennium
Editor: Nazila Ghanea
The themes and issues explored in this book - religion, human rights, politics and society could not be more relevant to the post 11 September 2001 world. They lie at the heart of global political debate today.
The collection explores these issues after the passing of just over two decades from the adoption of the United Nations Declaration on the Elimination of all Forms of Intolerance and Discrimination based on Religion or Belief. That declaration set out minimum international standards for the elimination of such discrimination. Sadly the challenge of intolerance on the basis of religion or belief continues to plague us, and tackling it seems to have become increasingly entrenched.
The complexity of this phenomenon requires expertise from different quarters. This collection draws from diplomatic, activist and theological quarters and benefits from the analysis of scholars of law, history, religious studies and sociology.
The ten chapters of this collection examine the relationship between human rights, law and religion; offer a typology for the study of religious persecution; problematise the consequences flowing from religious establishment in religiously plural society; analyse the implications of the directions being taken by the jurisprudence of the European Court of Human Rights and the protections offered by the European Commission council Directive 2000/43/EC outlawing workplace discrimination; study the 1981 Declaration and its promotion through the work of the UN Special Rapporteur on Freedom of Religion or Belief; and explore the intricacies of this freedom in detail from within the context of the United Kingdom and The Netherlands.
Hardback