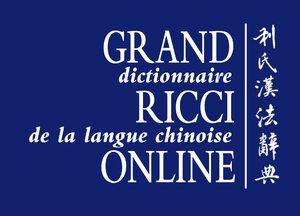 Le Grand Ricci Online
Le Grand Dictionnaire Ricci de la langue chinoise, or rather, as it has become widely known since its publication in 2001, Le Grand Ricci is the most comprehensive up-to-date dictionary of Chinese into a modern Western language. Though it covers the whole history of Chinese language development, most of the dictionary deals with early and imperial period Chinese language usage. Explanations and translations are in French. *
Our user-friendly online interface allows the user to efficiently perform even complex queries through all 13,392 main entries (single characters) or 280,000 expressions (or chinese words composed of a set of characters).
Le Grand Ricci Online Reference is part of Brill Online Chinese Reference Shelf.
Entries can be looked up: - by chinese character - by romanization (pinyin) (with or without tones) - by radical (Kangxi or simplified) and the number of additional strokes - by total number of strokes (of the simplified or traditional forms)
The words (expressions) can be looked up: - by their chinese characters - by the romanization (with or without tones) of their component characters - in both cases one can use one, several or all of the components, either as a precise sequence or anywhere (and in any order) in the chinese word
* Le Grand Ricci was developed by the Ricci institutes of Paris and Taipei through the Ricci Association (www.grandricci.org). First published with Desclée De Brouwer (DDB), the Dictionary is now with les Éditions du Cerf, where the printed volumes can be acquired at www.editionsducerf.fr
Online