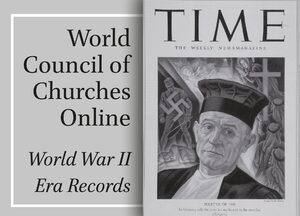 Historical background
The documents in this collection form a subset of the World Council of Churches archives dating from 1932 to 1957. They were assembled hurriedly and in a very provisional form during the “dark days” of the war by an administration just being born and still in the making. Under such chaotic conditions, some elements were inevitably lost and the original order of the records was difficult to reconstruct. Yet a dramatic story is revealed here, the story of the fledgling ecumenical movement’s thought, policy, and activities in the face of the power of Nazi Germany.
The ecumenical movement represents the effort of churches divided for centuries to re-establish contact with each other, to rediscover their common heritage, to explore possibilities for collaboration, to react in situations of crisis, and to find a new place within society by participating in the foundation of a new world community. To achieve these ends, the churches founded many organizations, including the International Missionary Council in 1910, the Life and Work movement in 1925, and the Faith and Order movement in 1927. In 1938, the Life and Work and Faith and Order movements came together to form the World Council of Churches, which was officially inaugurated in Amsterdam in 1948. Today the World Council of Churches is a worldwide fellowship of churches from different traditions: Orthodox (Oriental and Eastern Orthodox), Anglican, Old Catholic, most mainline Protestant churches (Moravian, Lutheran, Reformed, Methodist), the historic peace churches (Mennonite, Quakers, Church of the Brethren), and some evangelical churches (like Baptist and Pentecostal). Although the Roman Catholic Church is not a member, it participates as a member of the Commission on Faith and Order and sends official observers to all major meetings, such as the general assemblies.
During the Second World War, the World Council of Churches in Process of Formation was instrumental in smuggling several hundred Jews across the borders into Switzerland, actively helped by courageous and inventive young French workers affiliated with CIMADE (Comité Inter-Movement Auprès Des Evacués). Reflecting on this era, Dr. W. A. Visser ‘t Hooft, then General Secretary of the World Council of Churches, wrote "… as I look back on these attempts to help the Jews during the war years, I feel far from proud. I know that I should have done a great deal more."
Not all the sources testifying to this period have been preserved, but what remains is gathered in this collection.

Sections
In 2013 the WCC Archives moved in the newly arranged "Espace Archives", located in the west wing of the former Library premises in the backyard of the Ecumenical Centre, Geneva. The WCC Library united its collections at the Ecumenical Institute in Bossey, near Geneva. The WCC archives are divided into many different sections, reflecting the various bodies that have been active in the ecumenical scene during the 20th century. The records of the International Missionary Council and the General Correspondence Archives of the World Council of Churches’ General Secretariat, previously published on microfiche by BRILL/IDC Publishers, are examples of such sections.
The present collection is the first collection from the WCC that is made available electronically. Originally on microfiche, the collection covers the period from 1932 to 1957. The documents consist of newspapers, press clippings, press releases, telegrams, correspondence, minutes, manuscripts, and personal notes. The boxes are organized by 16 countries, mostly European (Austria, Czechoslovakia, England, France, Germany, Greece, Hungary, Italy, Netherlands, Poland, Yugoslavia), but also the United States of America, Colombia, and Israel, as well as China and Indonesia. Records relating to Germany account alone for thirty boxes.

Scholarly relevance
These archives have been studied by historians of the Bergier Commission, a commission set up to investigate the role of Switzerland during the Second World War, and many individual scholars. The collection includes correspondence and personal letters of such notable individuals as Dietrich Bonhoeffer, George Bell, Hans Schönfeld, Karl Barth, James McDonald, Georges Casalis, Adolf Freudenberg, Martin Niemöller, Otto Dibelius, Gerhart Riegner, Marc Boegner, and Willem Adolf Visser 't Hooft. The archives document not only the issues and events of the War, but also the beginning years of the World Council of Churches.
The material in this collection is of high value for researchers from different disciplines, such as political and historical sciences as well as church history, theology, ethics, and ecumenical studies. Churches from different parts of the world, like China, Israel, or Colombia, might find material here that help to interpret their own history, by original documents from their own offices and individuals as well as by documented views from other churches and ecumenical bodies.
As Dr. Visser 't Hooft wrote: "The war came. And at first it seemed as if it would at least mean that the clock of ecumenical history would be definitely set back. The staff became smaller and smaller. Many plans had to be cancelled. But right in the midst of war the tide turned. What new contacts between the churches lost in frequency, they gained in intensity and depth. The war did not weaken the council. On the contrary."

Pierre Beffa (former Director of the World Council of Churches Library), revised by Fernando Enns, Professor of (Peace-) Theology and Ecumenical Studies at the Vrije Universiteit Amsterdam, The Netherlands.