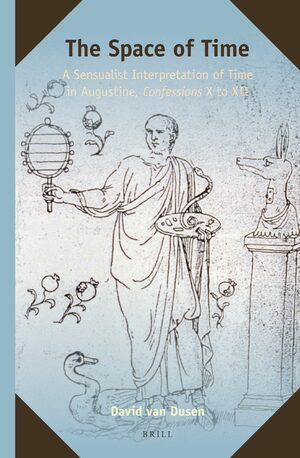 The Space of Time
A Sensualist Interpretation of Time in Augustine, Confessions X to XII
Series: Supplements to the Study of Time, Volume: 6
Author: David van Dusen
From Robert Grosseteste to Jean-François Lyotard, Augustine’s suggestion that time is a “dilation of the soul” ( distentio animi) has been taken up as a seminal and controversial time-concept, yet in The Space of Time, David van Dusen argues that this ‘dilation’ has been fundamentally misinterpreted.
Time in Confessions XI is a dilation of the senses—in beasts, as in humans. And Augustine’s time-concept in Confessions XI is not Platonic—but in schematic terms, Epicurean.
Identifying new influences on the Confessions—from Aristoxenus to Lucretius—while keeping Augustine’s phenomenological interpreters in view, The Space of Time is a path-breaking work on Confessions X to XII and a ranging contribution to the history of the concept of time.

’s beginnings, this was the central problem for Islamic reformers, too. Sociologists inherited this question from political philosophy and its key European representatives, such as Thomas Hobbes (1588–1679), John Locke (1632–1704), and Jean-Jacques Rousseau (1712–1778). In 1908, the German sociologist Georg

Reconstructing “Religion” from the Bottom Up
Author: Wouter J. Hanegraaff

exalting “the splendors of the religious imagination” or its supposed spiritual benefits: that is not where this argument is coming from. On the contrary, the claim is grounded in the classic Enlightenment tradition of empirical and critical philosophy from Thomas Hobbes and David Hume to Immanuel Kant

better and asserted that Spinoza was much worse and more dangerous than the aforementioned tract. Some orthodox polemicists turned the tables and identified the three impostors as the deist Herbert of Cherbury, Thomas Hobbes and Spinoza. In view of the revived Spinozist controversy in the 18th century