Jews in Another Environment
Surinam in the Second Half of the Eighteenth Century
Series: Brill's Series in Jewish Studies, Volume: 1
Author: Robert Cohen
The most important Jewish center in the western hemisphere during the eighteenth century was "the great colony" - Surinam. There, Jews formed perhaps the most privileged Jewish community in the world. They were often plantation and slave owners, as well as a sizeable proportion of the white population. They had their own village, with extensive autonomous rights.
This book is a study of the impact of environment on Jewish life in a colonial society. It analyzes the impact of environment upon migratory patterns, health and mortality, economic structures, intellectual life, and communal dynamics.
Following the methods of social history, this book uses an interdisciplinary approach to examine the impact of environment upon the modification of traditional values and modes of behavior.
This is the first full-length monograph on Surinamese Jewry to appear in two hundred years. The first one, the Historical Essay of David Nassy, treated Jewish history as part of the colonial experience. This book treats the colonial experience as part of Jewish history.
Hardback 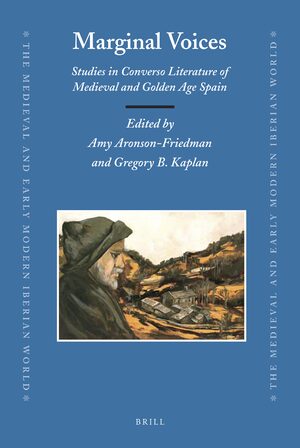 Marginal Voices
Studies in Converso Literature of Medieval and Golden Age Spain
Series: The Medieval and Early Modern Iberian World, Volume: 46
Authors: Amy I. Aronson-Friedman and Gregory B. Kaplan
The conversos of late medieval and Golden Age Spain were Christians whose Jewish ancestors had been forced to change faiths within a society that developed a preoccupation with pure Christian lineage. The aims of this book is to shed new light on the cultural impact of this social climate, in which public suspicion of the religious sincerity of conversos became widespread and scrutiny by the Inquisition came to impede social advancement and threaten life and property. The bulk of the essays center on literary works, including lesser known and canonical pieces, which are analyzed by scholars who reveal the heterogeneous nature of textual voices that are informed by an awareness of the marginal status of conversos.
Contributors are Gregory B. Kaplan, Ana Benito, Patricia Timmons, David Wacks, Bruce Rosenstock, Laura Delbrugge, Michelle Hamilton, Deborah Skolnik Rosenberg, Kevin Larsen and Luis Bejarano.
E-Book