section of carbonized wood above and a section of fossilized wood below, both seen through the microscope. In the preceding chapter ( Observ. XVI . Of Charcoal, or burnt Vegetables ) Hooke also compared fossil wood with burnt wood but not with green wood. Figure 7 Robert Hooke 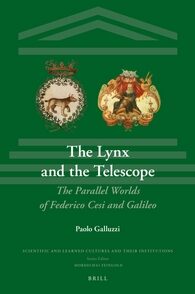 The Lynx and the Telescope
The Parallel Worlds of Cesi and Galileo
Series: Scientific and Learned Cultures and Their Institutions, Volume: 21
Author: Paolo Galluzzi
Set in the context of Counter-Reformation Rome, this book focuses on the twenty-year long relationship (1611-1630) between Galileo Galilei and Federico Cesi, the founder of the Academy of the Lynx-eyed. Contrary to the historiographical tradition, it demonstrates that the visions of Galileo and Cesi were not at all convergent. In the course of the events that led to the adoption of the anti-Copernican decree of 1616, Galileo realized that the Lynceans were not prepared to support his battle for freedom of thought. In addition to identifying the author of the anonymous denunciation of Galileo’s Assayer, Paolo Galluzzi offers an original reconstruction of the dynamics which culminated in the Church’s condemnation of the famous Tuscan scientist in 1633.