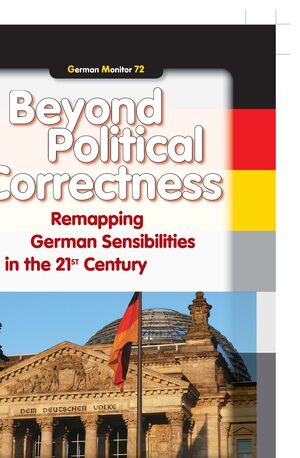 Beyond Political Correctness
Remapping German Sensibilities in the 21st Century
Series: German Monitor, Volume: 72and German Monitor, Volume: 72
Editors: Christine Anton and Frank Pilipp
The articles assembled in this book discuss important questions about German society and the very notion of what being German means in the age of globalization and the vanishing of nation-states in a continuously strengthening European Union; the question about what is German culture in a postmodern era; and how the past affects and shapes the present and future of hybrid German generations. Taking into account not only national but also transnational and recent global developments and concomitant critical debates, this book continues to engage in the discourses of rethinking German national identity, exploring socio-cultural, literary and cinematic responses by German, German Jewish, and other minority authors and filmmakers.
These essays focus particularly on trends since the turn of the millennium, and explore how these trends and their new developments are represented and interpreted through the eyes of different media.
Beyond Political Correctness: Remapping German Sensibilities in the 21st Century will appeal to readers with a wide variety of academic interests, including cultural history, film studies and contemporary German literature, German-Jewish and Minority literature.
E-Book