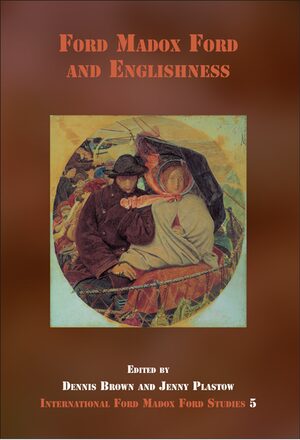 Ford Madox Ford and Englishness
Series: International Ford Madox Ford Studies, Volume: 5
Editors: Dennis Brown and Jenny Plastow
The controversial British writer Ford Madox Ford (1873-1939) is increasingly recognized as a major presence in early twentieth-century literature. International Ford Madox Ford Studies has been founded to reflect the recent resurgence of interest in him. Each volume is based upon a particular theme or issue; each will relate aspects of Ford’s work, life, and contacts, to broader concerns of his time. Ford is best-known for his fiction, especially The Good Soldier, long considered a modernist masterpiece; and Parade’s End, which Anthony Burgess described as ‘the finest novel about the First World War’; and Samuel Hynes has called ‘the greatest war novel ever written by an Englishman’. These works, together with his trilogy The Fifth Queen, about Henry VIII and Katharine Howard, are centrally concerned with the idea of Englishness. All these, and other works across Ford’s prolific oeuvre, are studied here. Critics of Edwardian and Modernist literature have been increasingly turning to Ford’s brilliant 1905 experiment in Impressionism, The Soul of London, as an exemplary text. His trilogy England and the English (of which this forms the first part) provides a central reference-point for this volume, which presents Ford as a key contributor to Edwardian debates about the ‘Condition of England’. His complex, ironic attitude to Englishness makes his approach stand out from contemporary anxieties about race and degeneration, and anticipate the recent reconsideration of Englishness in response to post-colonialism, multiculturalism, globalization, devolution, and the expansion and development of the European Community.
Ford’s apprehension of the major social transformations of his age lets us read him as a precursor to cultural studies. He considered mass culture and its relation to literary traditions decades before writers like George Orwell, the Leavises, or Raymond Williams. The present book initiates a substantial reassessment, to be continued in future volumes in the series, of Ford’s responses to these cultural transformations, his contacts with other writers, and his phases of activity as an editor working to transform modern literature. From another point of view, the essays here also develop the project established in earlier volumes, of reappraising Ford’s engagement with the city, history, and modernity.
Paperback