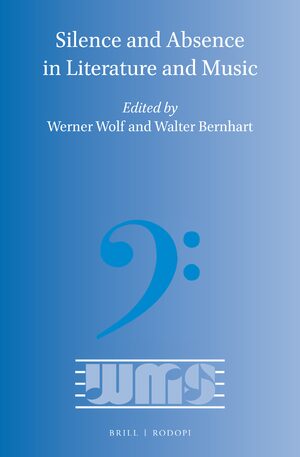 Silence and Absence in Literature and Music
Series: Word and Music Studies, Volume: 15and Word and Music Studies Online, Volume: 15
Editors: Werner Wolf and Walter Bernhart
This volume focusses on the rarely discussed reverse side of traditional, ‘given’ objects of studies, namely absence rather than presence (of text) and silence rather than sound. It does so from the bifocal and interdisciplinary perspective which is a hallmark of the book series Word and Music Studies.
The twelve contributors to the main subject of this volume approach it from various systematic and historical angles and cover, among others, questions such as to what extent absence can become significant in the first place or iconic (silent) functions of musical scores, as well as discussions of fields ranging from baroque opera to John Cage’s 4’33’’. The volume is complemented by two contributions dedicated to further surveying the vast field of word and music studies.
The essays collected here were originally presented at the Ninth International Conference on Word and Music Studies held at London University in August 2013 and organised by the International Association for Word and Music Studies. They are of relevance to scholars and students of literature, music and intermediality studies as well as to readers generally interested in phenomena of absence and silence.