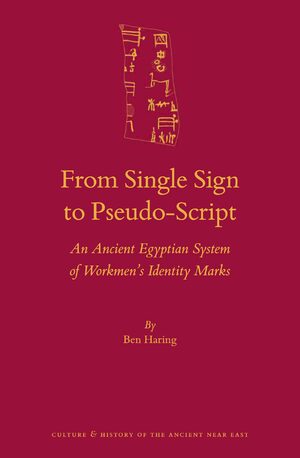 From Single Sign to Pseudo-Script
An Ancient Egyptian System of Workmen’s Identity Marks
Series: Culture and History of the Ancient Near East, Volume: 93
Author: Ben Haring
Writing is not the only notation system used in literate societies. Some visual communication systems are very similar to writing, but work differently. Identity marks are typical examples of such systems, and this book presents a particularly well-documented marking system used in Pharaonic Egypt as an exemplary case.
From Single Sign to Pseudo-Script is the first book to fully discuss the nature and development of an ancient marking system, its historical background, and the fascinating story of its decipherment. Chapters on similar systems in other cultures and on semiotic theory help to distinguish between unique and universal features. Written by Egyptologist Ben Haring, the book addresses scholars interested in marking systems, writing, literacy, and the semiotics of visual communication.

"With this publication, the author exemplified how a close familiarity with a subject enables research in areas of Egyptian society that had not been touched until now and how the resulting insight is presented properly." - Eva-Maria Engel, Humboldt-Universität zu Berlin, in: Bibliotheca Orientalis 76.1-2 (2019)
E-Book