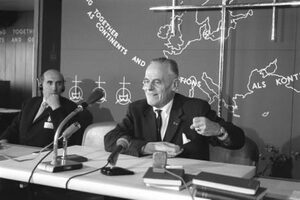 Until now, the World Council of Churches (WCC) had six general secretaries: Dr. Willem Adolf Visser ’t Hooft (1948-1966), Eugene Carson Blake (1966-1972), Philip Alford Potter (1972-1984), Emilio Castro (1985-1992), Konrad Raiser (1993-2003), and Samuel Kobia (since 2004).
The General Secretary is elected by the Central Committee for five years. He is the chief executive officer of the WCC. As such he is the head of the staff. He organizes WCC governing body meetings, directs the activities of the Council according to the mandates and policies of the governing bodies and conducts analysis of trends affecting the ecumenical movement. He also provides and initiates reflection on emerging issues in the ecumenical movement and in the world, projects and promotes the image of the ecumenical movement, represents and interprets the Council to member churches, ecumenical partners, secular bodies and authorities. He finally identifies and defines long-range and evolving strategic directions of WCC.

Sections
The archives of the ecumenical movement are housed in the WCC’s Library & Archives, in Geneva. They are divided into many different sections, reflecting the various bodies that were active in the ecumenical scene during the 20th century.
The records of the International Missionary Council, the Programme to Combat Racism and the Dialogue with People of Living Faith – all previously published on microform by IDC Publishers – are examples of such sections.
The present collection makes available on microform another section of the ecumenical archives, dealing with the first four WCC General Secretaries personal archives in the period 1920-1992. The documents in the archives consist of articles, manuscripts, personal notes, speeches and works.

1st WCC General Secretary: Willem A. Visser ’t Hooft (1948-1966)
(*1900 Haarlem, Netherlands; †1985 Geneva, Switzerland) Netherlands Reformed Church/National Protestant Church, Geneva
Visser ’t Hooft was the first general secretary of the WCC, 1938/1948-1966, and from 1968 onward its honorary president. He was active in the student Christian Movement in the Netherlands, became secretary of the World's YMCA in Geneva in 1924, and was the youngest participant in the Stockholm Life and Work conference in 1925. The doctoral dissertation that he presented to the University of Leiden in 1982 was entitled "The Background of the Social Gospel in America". In 1931 Visser 't Hooft became secretary, in 1933 general secretary and in 1936 president of the World Student Christian Federation. He was actively engaged in the preparation of the conferences in Oxford and Edinburgh in 1937, and appointed as general secretary of the WCC in process of formation at the meeting of the provisional committee in Utrecht in 1938. As WCC general secretary he visited many countries around the world making a vast number of personal contacts, lecturing on behalf of the Council and attending meetings. The bibliography of his literary output contains over 1300 titles. He was honoured by several Festschriften, numerous honorary degrees and awards. He published his Memoirs in 1973 and was from 1948 onward the editor of the Ecumenical Review, which was well-planned and of outstanding theological quality.
Paul Abrecht wrote after his death that without Visser 't Hooft "combination of gifts the WCC might never have existed. No other person in the leadership of those days possessed the acumen, imagination, statesmanship experience, daring, energy and languages necessary to bring it into being".
In 1987 the WCC central committee adopted a proposal to set up a "Visser 't Hooft endowment fund for ecumenical leadership development" and commended this endeavour and its success to the churches and the public for the strengthening of the ecumenical movement and its future.

2nd WCC General Secretary: Eugene Carson Blake (1966-1972)
(*1906 St. Louis, Missouri, USA; †1985, Stamford, Connecticut, USA) United Presbyterian Church in the USA
Eugene Carson Blake served as WCC general secretary from 1966-1972. After studying theology at Princeton Theological seminary, Blake became pastor of a large parish in Pasadena, California. In 1951 he was elected stated clerk of the Presbyterian Church in the USA). In a sermon at Grace Cathedral in San Francisco in 1960, he made a proposal for church union of several churches in the USA, which developed into the Consultation on Church Union. He was president of the National Council of the Churches of Christ in the USA, 1954-1957, and continued as a member of the general board until 1966. Blake was elected second general secretary of the WCC 1966-1972, while he was earlier member of its central and executives committees, 1954-1961, and chairman of the Division of Inter Church Aid, refugee and World Service, 1961-1966. He was instrumental in increasing Roman Catholic participation in the ecumenical movement, received Paul VI in the Ecumenical Centre in Geneva in 1969, and was personally involved in setting up the Program to Combat Racism. He had considerable skills and guided the WCC in a period of expansion and reconstruction.

3rd WCC General Secretary: Philip A. Potter (1972-1984)
(*1921 Roseau, West Indies) Methodist Church
Philip A. Potter, a Methodist pastor, missionary and youth leader from Dominica in the West Indies served as WCC general secretary from 1972-1984. Besides 24 years on the WCC staff, he was a missionary to poor and mostly Creole -speaking people in Haiti, president of the World Student Christian Federation and a staff member of the Methodist Missionary Society in London.
A central committee resolution honouring Potter on his retirement identified some main thrusts the WCC owed to his leadership: "the insistence on the fundamental unity of Christian witness and Christian service which the gospel commands and makes possible, the correlation of faith and action, the inseparable connection between the personal spiritual life of Christian believers and their obedient action in the world".
An eloquent and forceful speaker and leader of Bible studies, Potter received numerous honorary degrees and awards.

4th WCC General Secretary: Emilio Castro (1985-1992)
(*1927, Uruguay) Evangelical Methodist Church of Uruguay
Emilio Castro, a Methodist pastor and theologian from Uruguay was the WCC general secretary from 1985-1992. He had previously served as director of the WCC commission on World Mission and Evangelism from 1973-1983. He studied at Union Theological Seminary, Buenos Aires, 1944-50, and was ordained in the Evangelical Methodist Church of Uruguay in 1948. Under a WCC scholarship, he pursued post-graduate work in Basel in 1953-54 under the guidance of Karl Barth. Returning to Latin America, he was pastor of Methodist churches in La Paz, Bolivia (1954-56, and in Montevideo, Uruguay, 1957-65). His church and ecumenical activities in Latin America have been numerous. Elsewhere, his ecumenical activities have been with the Christian Peace Conference and with the Agency for Christian Literature development. He received a doctoral degree from the University of Lausanne in 1984. His attendance at many conferences has included the WCC assemblies of 1961 and 1968, the Life and Mission Conference of the World Student Christian Federation in Strasbourg, and the 1966 Church and Society conference in Geneva.
Microfilm Collection 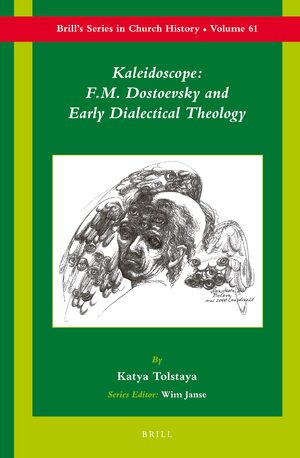 Kaleidoscope: F.M. Dostoevsky and the Early Dialectical Theology
Series: Brill's Series in Church History, Volume: 61
Author: Katya Tolstaya
Introducing a new hermeneutics, this book explores the correlation between the personal faith of F.M. Dostoevsky (1821-1881) and the religious quality of his texts. In offering the first comprehensive analysis of his ego documents, it demonstrates how faith has methodologically to be defined by the inaccessibility of the 'living person'. This thesis, which draws on the work of M.M. Bakhtin, is further developed by critically examining the reception of Dostoevsky by the two main representatives of early dialectical theology, Karl Barth and Eduard Thurneysen. In the early 1920s, they claimed Dostoevsky as a chief witness to their radical theology of the fully transcendent God. While previously unpublished archive materials demonstrate the theological problems of their static conceptual interpretation, the 'kaleidoscopic' hermeneutics is founded on the awareness that a text offers only a fixed image, whereas living faith is in permanent motion.
E-Book