Legal and Political Philosophy
Series: Social, Political and Legal Philosophy, Volume: 5and Rodopi Philosophical Studies, Volume: 5
Editor: Enrique Villanueva
Legal and Political Philosophy, edited by Enrique Villanueva, is the first volume in the series Social, Political, and Legal Philosophy, published by Rodopi also under his editorship. It contains six original essays by leading political philosophers and philosophers of law (Waldron, Coleman, Postema, Shapiro, Sayre-McCord, and Kraus), along with critical papers on those essays, and replies. This is cutting edge work that elicits sharp responses already as it is published, with the debate joined as the authors reply. Social, Political, and Legal Philosophy is a new book series, edited by Enrique Villanueva, and published by Rodopi Publishers as part of Rodopi Philosophical Studies. The series will publish collections of new essays on topics in social or political or legal philosophy. New volumes will be published approximately every year or every other year.
Hardback 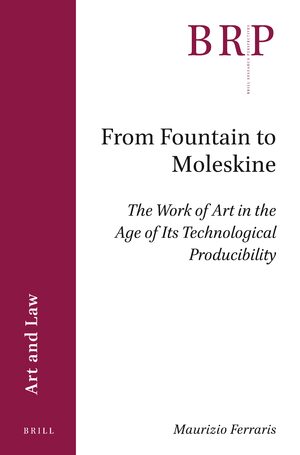 From Fountain to Moleskine
The Work of Art in the Age of its Technological Producibility
Series: Brill Research Perspectivesand Brill Research Perspectives E-Books Online
Author: Maurizio Ferraris
Photography was invented in the mid-nineteenth century, and ever since that moment painters have been asking what they are there for. Everyone has their own strategy. Some say they do not paint what is there, but their impressions. Others paint things that are not seen in the world, and therefore cannot be photographed, because they are abstractions. Others yet exhibit urinals in art galleries. This may look like the end of art but, instead, it is the dawn of a new day, not only for painting but – this is the novelty – for every form of art, as well as for the social world in general and for industry, where repetitive tasks are left to machines and humans are required to behave like artists.
E-Book (PDF)