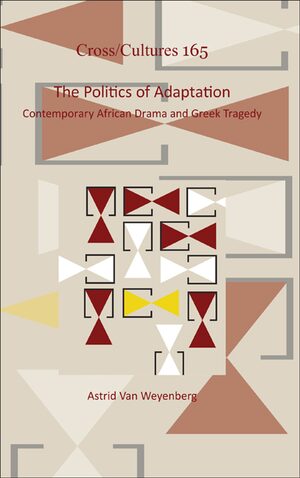 The Politics of Adaptation
Contemporary African Drama and Greek Tragedy
Series: Cross/Cultures, Volume: 165
Author: Astrid Van Weyenberg
This book explores contemporary African adaptations of classical Greek tragedies. Six South African and Nigerian dramatic texts – by Yael Farber, Mark Fleishman, Athol Fugard, Femi Osofisan, and Wole Soyinka – are analysed through the thematic lens of resistance, revolution, reconciliation, and mourning.
The opening chapters focus on plays that mobilize Greek tragedy to inspire political change, discussing how Sophocles’ heroine Antigone is reconfigured as a freedom fighter and how Euripides’ Dionysos is transformed into a revolutionary leader.
The later chapters shift the focus to plays that explore the costs and consequences of political change, examining how the cycle of violence dramatized in Aeschylus’ Oresteia trilogy acquires relevance in post-apartheid South Africa, and how the mourning of Euripides’ Trojan Women resonates in and beyond Nigeria.
Throughout, the emphasis is on how playwrights, through adaptation, perform a cultural politics directed at the Europe that has traditionally considered ancient Greece as its property, foundation, and legitimization. Van Weyenberg additionally discusses how contemporary African reworkings of Greek tragedies invite us to reconsider how we think about the genre of tragedy and about the cultural process of adaptation.
Against George Steiner’s famous claim that tragedy has died, this book demonstrates that Greek tragedy holds relevance today. But it also reveals that adaptations do more than simply keeping the texts they draw on alive: through adaptation, playwrights open up a space for politics. In this dynamic between adaptation and pre-text, the politics of adaptation is performed.
E-Book