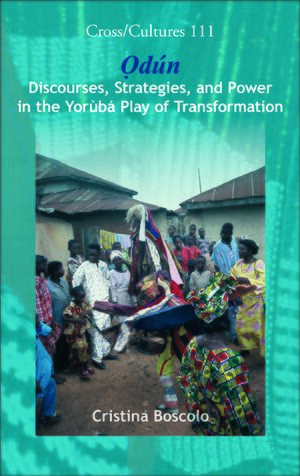 Odún
Discourses, Strategies, and Power in the Yorùbá Play of Transformation
Series: Cross/Cultures, Volume: 111
Author: Cristina Boscolo
A poetic ‘voice’ scans the rhythm of academic research, telling of the encounter with odún; then the voice falls silent. What is then raised is the dust of a forgotten academic debate on the nature of theatre and drama, and the following divergent standpoints of critical discourses bent on empowering their own vision, and defining themselves, rather, as counterdiscourses. This, the first part of the book: a metacritical discourse, on the geopolitics (the inherent power imbalances) of academic writing and its effects on odún, the performances dedicated to the gods, ancestors, and heroes of Yorùbá history.
But odún: where is it? and what is it? And the ‘voice’? The many critical discourses have not really answered these questions. In effect, odún is many things. To enable the reader to see these, the study proceeds with an ‘intermezzo’: a frame of reference that sets odún, the festival, in its own historico-cultural ecoenvironment, identifying the strategies that inform the performance and constitute its aesthetic. It is a ‘classical’ yet, for odún, an innovative procedure. This interdisciplinary background equips the reader with the knowledge necessary to watch the performance, to witness its beauty, and to understand the ‘half words’ odún utters.
And now the performance can begin. The ‘voice’ emerges one last time, to introduce the second section, which presents two case studies. The reader is led, day by day, through the celebrations – odún edì, Morèmi’s story, and its realization in performance; then confrontation by the masks of the ancestors duing odún egúngún (particularly as held in Ibadan). The meaning of odún becomes clearer and clearer.
Odún is poetry, dances, masks, food, prayer. It is play ( eré) and belief ( ìgbàgbó). It is interaction between the players (both performers and spectators). It is also politics and power. It contains secrets and sacrifices. It is a reality with its own dimension and, above all, as the quintessential site of knowledge, it possesses the power to transform. In short, it is a challenge – a challenge that the present book and its voices take up.
E-Book

Voices of Justice and Reason
Apartheid and Beyond in South African Literature
Series: Cross/Cultures, Volume: 61
Author: Geoffrey V. Davis
Over the past fifty years transformations of great moment have taken place in South Africa. Apartheid and the subsequent transition to a democratic, non-racial society in particular have exercised a profound effect on the practice of literature.
This study traces the development of literature under apartheid, then seeks to identify the ways in which writers and theatre practitioners are now facing the challenges of a new social order.
The main focus is on the work of black writers, prime among them Matsemela Manaka, Mtutuzeli Matshoba and Richard Rive, who, as politically committed members of the oppressed majority, bore witness to the “black experience” through their writing. Despite the draconian censorship system they were able to address the social problems caused by racial discrimination in all areas of life, particularly through forced removals, the migrant labour system, and the creation of the homelands. Their writing may be read both as a comprehensive record of everyday life under apartheid and as an alternative cultural history of South Africa.
Particular attention is paid to theatre as a barometer of social change in South Africa.
The concluding chapters consider how in the current period of transition writers and arts institutions have set about reassessing their priorities, redefining their function and seeking new aesthetic directions in taking up the challenge of imagining a new society.
Hardback 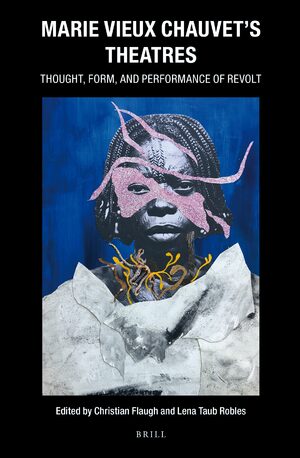 This collection is a beautiful gathering of voices exploring Chauvet’s theatrical work, along with the role of theatre in her novels. The richly textured and evocatively written essays offer many new and necessary insights into the work of one of Haiti’s greatest writers.
— Laurent Dubois, Marcello Lotti Professor of Romance Studies and History, Duke University. Author of Haiti: The Aftershocks of History

Playing the Market
The Market Theatre, Johannesburg. Revised and updated edition
Series: Cross/Cultures, Volume: 50
Author: Anne Fuchs
The relationship between Johannesburg’s Market Theatre and the economic and political forces of South Africa's apartheid regime was both complex and somewhat ambiguous. The theatre's two founders, Mannie Manim and Barney Simon, however, from idealistic beginnings managed to steer their experimental enterprise around pitfalls ranging from censorship, boycotts and recuperation by big business to the difficulties encountered in finding black authors, let alone black audiences.
If the place occupied by the Market institution in apartheid society is emphasized throughout the present study, its contribution to the aesthetic of resistance is also underlined through detailed criticism of the plays and authors dominating the theatre. Pieter-Dirk Uys, Barney Simon's workshop plays and, among others, Black Consciousness plays are subjected to various methods of theatre performance analysis. The reckoning that had to come in the early 1990s revealed itself as globally positive; the reasons for this may be found in the updated concluding part of Playing the Market, which is composed of more general essays (including one on the vibrant Junction Avenue Theatre Company) on how the theatre scene in contemporary South Africa started to change. A postscript reveals more specific aspects of the Market situation in the late 1990s when its hegemony in the New South Africa was already being questioned.
Hardback 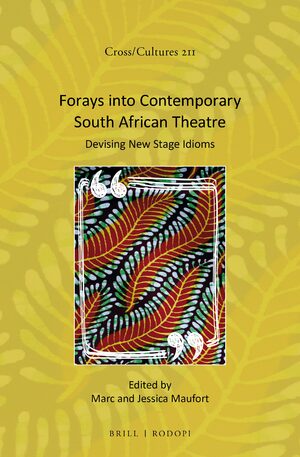 Forays into Contemporary South African Theatre
Devising New Stage Idioms
Series: Cross/Cultures, Volume: 211
Editors: Marc Maufort and Jessica Maufort
In the years that followed the end of apartheid, South African theatre was characterized by a remarkable productivity, which resulted in a process of constant aesthetic reinvention. After 1994, the “protest” theatre template of the apartheid years morphed into a wealth of diverse forms of stage idioms, detectable in the works of Greg Homann, Mike van Graan, Craig Higginson, Lara Foot, Omphile Molusi, Nadia Davids, Magnet Theatre, Rehane Abrahams, Amy Jephta, and Reza de Wet, to cite only a few prominent examples. Marc and Jessica Maufort’s multivocal edited volume documents some of the various ways in which the “rainbow” nation has forged these innovative stage idioms. This book’s underlying assumption is that creolization reflects the processes of identity renegotiation in contemporary South Africa and their multi-faceted theatrical representations.