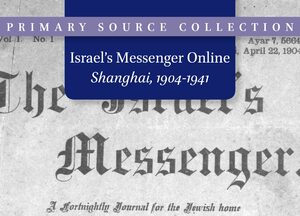 Israel's Messenger Online
Shanghai, 1904-1941
This fully text-searchable holding of the complete Israel’s Messenger (in Chinese Youtai Yuebao), 1904-1941, is a core resource for Asian Studies, with a particular emphasis on the Jewish community in Shanghai. Shanghai Jewry occupied near-outsider status within the Foreign Settlement. Influential commercial and political circles around the Sassoon and the Ezra families were closely attuned to the political agenda of nationalist China and well-entrenched in key committees of the Foreign Settlements. Nevertheless, in July 1933, following Japan’s withdrawal from the League of Nations, Israel’s Messenger championed Japan as the leader of Greater Asia, and the founder-editor of Israel’s Messenger, N.E.B. Ezra called on the Japanese Minister to Shanghai to say so. Here significant personalities in Shanghai Jewry, such as George Sokolsky and Ezra himself, and the Sassoon family organised and campaigned for the greater safety and political recognition of Shanghai and worldwide Jewry, and of the Zionist cause. Note: Publication was suspended from February 1910 - September 1918. This edition is therefore the complete edition.
Online