Bibliographic entry in Chapter 3: From the Confederation to the Civil War | The War of 1812 authorZimmerman, James F.imprintNew York: Columbia University Press, 1925.annotationThe only monograph solely devoted to impressment, Zimmerman's word deserves examination. It is very much dated and fails to

Bibliographic entry in Chapter 3: From the Confederation to the Civil War | The War of 1812 authorSteel, AnthonyimprintAmerican Historical Review 57 (January 1952): 352-69.annotationSteel argues that impressment was vital to British security and indeed survival in the face of the Napoleonic

In: The SHAFR Guide Online
US copyright expert goes to Nigeria and is impressed
Author: Eamon T Fennessy

Bibliographic entry in Chapter 3: From the Confederation to the Civil War | The War of 1812 authorBrunsman, DenverimprintJournal of the Early Republic 30 (Winter 2010):annotationApplies the concept of forced migration to the impressment question. Argues that the controversy resulted from

Bibliographic entry in Chapter 2: The Seventeenth and Eighteenth Centuries and the American Revolution | Maritime authorBrunsman, DenverimprintCharlottesville: University of Virginia Press, 2013.annotationThis history of impressment describes the negative impact of the practice on individuals and

the abstract, and less concerned for the fate of the sailors taken.keywordsWar of 1812; origins of the War of 1812; impressment; Chesapeake incident... 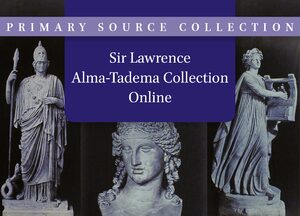 The University of Birmingham Library

This collection contains the study collection of photographs; some drawings, tracings and prints; and correspondence with friends and patrons of the Dutch painter Lawrence Alma-Tadema (1836-1912) who moved to England in 1870 where he became very famous.

Lawrence Alma-Tadema was born in Friesland, The Netherlands, in 1836. He trained in Antwerp with Baron Henri Ley (1815-1869), a painter of 16th century Flemish historical subjects, and with Louis de Taeye (1822-1890) a painter and professor of archaeology. During his honeymoon in 1863, Alma-Tadema visited Italy. He was very impressed by the archaeological remains he saw in Florence, Rome, Naples and Pompeii and his love for Roman antiquity was born. He began to acquire a reputation, particularly in England, as a painter of historical subjects. He therefore decided to move to London in 1870, and his popularity continued to grow. In 1876 he became a member of the Royal Academy. Throughout the remainder of his life he enjoyed great fame and fortune and was knighted by Queen Victoria in 1899. When he died in 1912 he was accorded the rare privilege of being buried in St. Paul's Cathedral.

The photographs
Alma-Tadema used many elements of Roman art and architecture in his paintings. He strove for historical authenticity in every small detail and in order to achieve this he made use of photographs. He had in fact collected photographs since his journey through Italy in 1863, such photographs being at the time a popular medium for archaeological documentation as well as for "Grand Tour" souvenirs. Alma-Tadema bought hundreds of photographs during his many journeys, of which many, but by no means all, are of Italian subjects. He stored these photographs, glued on cardboard mounts, in portfolios. These are sorted according to subject: Roman aqueducts, triumphal arches, Egyptian architecture, flowers and animals, etc. Details from the photographs are often to be recognized in his paintings. The names of the photographers are usually unknown because Alma-Tadema did not write their names on the mounts: he regarded the subject matter as important, not the photographs' value to art history. However, recent studies have established that among the photographers represented are such famous names as Sommer, Tuminello, Simelli, Plüschow, Salzman, Du Camp, Bonfils and Beato. The original 164 portfolios and 6 albums, containing some 5,300 photographs, together with some original drawings, tracings and prints, were donated in 1915 to the Victoria and Albert Museum. In 1947 they were transferred to Birmingham University Library.

The correspondence
In addition to the visual material, the Alma-Tadema Collection of Birmingham University Library contains letters from Lawrence Alma-Tadema (and some written by his wife Laura and daughter Anna) to friends and patrons. Letters to his friend the singer and composer Sir George Henschel (1850-1934) form a large part of the collection.
Online