Clear All
Download Citations
Page:1234567891011 ...
Selected Essays on Intermediality by Werner Wolf (1992–2014)
Theory and Typology, Literature-Music Relations, Transmedial Narratology, Miscellaneous Transmedial Phenomena
Series:  Studies in Intermediality, Volume: 10 and  Studies in Intermediality Online, Volume: 10
Author: Werner Wolf
Editor: Walter Bernhart
This volume collects twenty-two major essays by Werner Wolf published between 1992 and 2014, all of them revised but retaining the original argument. They form the core of those seminal writings which have contributed to establishing 'intermediality' as an internationally recognized research field, besides providing a by now widely accepted typology of the field and opening intermedial perspectives on areas as varied as narratology, metareferentiality and iconicity. The essays are presented chronologically under the headings of “Theory and Typology”, “Literature–Music Relations”, “Transmedial Narratology”, and “Miscellaneous Transmedial Phenomena” and cover a wide spectrum of topics of both historical and contemporary relevance, ranging from J.S. Bach, Mozart, Schubert and Gulda through Sterne, Hardy, Woolf and Beckett to Jan Steen, Hogarth, Magritte and comics. The volume should be essential reading for scholars of literature, music and art history with an interdisciplinary orientation as well as general readers interested in the fascinating interaction of the arts.
E-Book (PDF) 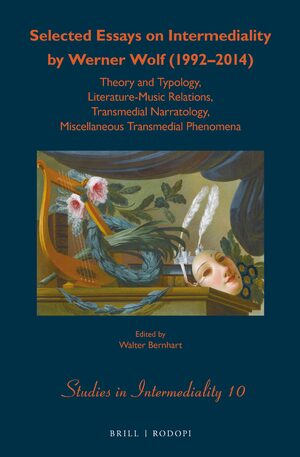