Miconia sellowiana (Melastomataceae), a widespread species occurring in Araucaria Forest, Montane Dense Forest and Upper Montane Forest (Paraná state, Brazil) has a highly variable foliar morphology. This study investigated whether the wood anatomy follows this pattern influenced by environmental conditions. Samples of six individuals per area were collected, fixed and prepared, according to standard techniques in wood anatomy. ANOVA indicated differences for length and diameter of vessel elements and fibres, fibre wall thickness, width of rays and ray frequency, especially regarding the population of the Upper Montane Forest. The secondary xylem from this vegetation is characterized by shorter vessel elements and fibres, thicker fibre walls and wider rays. These characteristics are associated to a certain degree of water stress imposed to the plants in the Upper Montane Forest, mainly due to the shallow neosol soils. The Araucaria Forest and the Montane Dense Forest have more similar environmental conditions, supported by the Cluster analysis. The Principal Components Analysis explained 98% of the total variance, where fibre and vessel element lengths showed a posi-tive correlation; however, this analysis did not allow the separation of three distinct groups. Although less pronounced, the wood anatomical differences corroborate the results obtained with foliar morphology, where leaves from the Upper Montane Forest presented the most xeric characteristics among the populations of Miconia sellowiana studied.

A Survey of the Fossil Record for Dicotiledonous Wood and its Significance for Evolutionary and Ecological Wood Anatomy
Authors: Elisabeth A. Wheeler and Pieter Baas

We studied wood anatomy and specific gravity in a total of 18 trees of Ocotea curucutuensis, a recently described species, lacking wood anatomical information. Nine sample trees were obtained in each of two areas, Pico do Itapeva (PI) and Núcleo Curucutu (NC), both in the state of São Paulo, Brazil. These areas have marked differences in precipitation, altitude, and temperature. Anatomical differences between the two populations appeared related to tree size, and possibly indirectly to climate. Higher wood specific gravity related with the smaller diameter in NC trees is hypothesized to contribute to mechanical support of the epiphyte-laden trees and to resistance against the prevailing strong winds.

Charcoal often retains sufficient qualitative anatomical features for the family and genus of the wood to be identified. During the charring process however, considerable and sometimes unexpected changes in quantitative characters occur, which are of particular importance to species identification and ecological wood anatomy. Comparative measurements were made using charred and uncharred trunkwood from six common southern African savanna trees. SampIes were charred for 30 minutes at either 400 or 700°C. Charcoal yield and significant quantitative changes in vessel diameter and ray cells are related both to wood anatomy and to the process of combustion. Differences observed on charring were most closely correlated with the nature and quantity of the fibres. Axial parenchyma cells expanded after charring at both temperatures.

Wood of 207 species, representing all 178 woody genera of the Munz flora of southern California, was studied by means of sections and macerations. Data were gathered on features relating to the conducting system: number of vessels per mm2, diameter of vessels, length of vessel elements, number of bars per perforation plate, presence of true tracheids, vasicentric tracheids, vascular tracheids, helical sculpture, and growth rings. The occurrence of these features is analysed both with respect to each other and to ecological groupings and habit groupings. Statistically significant data permit ecological groupings to demonstrate degree of xeromorphy in wood features. Xeromorphy is indicated by more numerous vessels per mm2, narrow vessels, shorter vessel elements, presence of vasicentric tracheids or vascular tracheids, presence of helical sculpture on vessel walls, and presence of well-marked growth rings (growth rings are common in moist habitats because in southern California these are also montane and therefore cold in winter). All of these appear to have developed in many phylads independently. Vessel element length appears to change less rapidly, at least in some phylads (those with true tracheids) than the other features. Presence of scalariform perforation plates and of true tracheids is interpreted as relictual; scalariform plates occur virtually only in mesic habitats and in a small number of species. True tracheids, although relictual in nature, have been preferentially preserved because of the value of their enormous safety. Groups without true tracheids have evolved vasicentric tracheids or vascular tracheids (the three types are mutually exclusive) to a high degree. By deducting the species with true and vascular tracheids, one finds that 100% of the alpine shrubs, 77% of the desert shrubs, and 75% of the chaparral shrubs which could possibly have evolved vasicentric tracheids actually have them. These are the three ecological groupings which have vasicentric tracheids not only in southern California, but other areas of the world as well. Tracheid presence (and to a lesser extent vasicentric tracheid presence) forestalls vessel grouping, but in tracheid-free groups vessel grouping is a highly adaptive strategy for xeromorphy. One can rank xeromorphic connotation of qualitative features on the basis of data herein: growth rings are the most common numerically, followed by helical sculpture, vasicentric tracheids, and vascular tracheids. Vasicentric tracheids, like true tracheids, tend to occur in evergreen shrubs whereas vascular tracheids tend to be related to drought-deciduous shrubs. Among quantifiable features, number of vessels per mm2 changes more rapidly than vessel diameter. Scalariform perforation plates, true tracheid presence, and long vessel elements are associated with each other statistically . By entering number of woody species for each genus in the flora and performing appropriate computations, a figure for each feature is projected on the basis of the 512 woody species of southern California. This pro-rated figure shows that phylads with any of the mechanisms cited as signifying xeromorphy speciate much more rapidly than do the phylads with mesomorphic wood features.

The wood anatomy of 67 species of Erythroxylum, Nectaropetalum and Pinacopodium was analysed from an ecological, systematic and evolutionary perspective. Wood anatomy variation within the pantropical genus Erythroxylum is explicable largely in relation to ecological factors and correlative differences in plant architecture, leaf size and duration and foliar anatomy. Wood anatomy ranges between primitively mesomorphic and either meso- or xeromorphically specialised. Wood inclusion type and leaf structural features are strongly interrelated, thus reflecting both taxonomic affinities and ecological profiles of the species. The most wood anatomically variable infrageneric taxa within Erythroxylum are the New World sections Archerythroxylum and Rhabdophyllum, which include architecturally diverse, deciduous and evergreen species. Due to the intergrading ranges of wood anatomical variation among consectional and/or sympatric Erythroxylum species, attempts to identify wood samples to the species level are ill-advised in the absence of complementary ecological, geographic and leaf structural data. The wood anatomical uniformity of the cultivated cocas and their closest wild relatives of sect. Archerythroxylum implies their shared mesophytic ancestry, whereas chemical, genetic and leaf structural differences reflect the long term human selection, isolation and cultivation of Erythroxylum within ecologically disparate regions of South America. Wood (and leaf) anatomy of the drought sensitive E. coca var. coca is the most primitive and mesomorphic of the cultivated cocas, whereas both drought tolerant varieties of E. novogranatense are more wood (and leaf) anatomically specialised. The closest affinities of the Erythroxylaceae to other families of the Geraniales-Linales-Malpighiales alliance occur among the most wood anatomically primitive, mesomorphic and putatively basal, evergreen taxa within each family.

A Comparison of the Ecological Wood Anatomy of the Floras of Southern California and Israel
Authors: Pieter Baas and Sherwin Carlquist

A comparison is made between ecological trends in wood anatomy found in southern California and Israel and adjacent regions. Trends for type of vessel perforation, vessel member length and the occurrence of helical thickenings show striking parallels. Characters like vessel diameter and frequency and incidence of (fibre-)tracheids show only weakly similar trends. Vessel grouping and ring-porosity do not show any parallel in the data for southern California and Israel. The differences between the two floras can largely be attributed to different floristic composition and the alternative possibilities for safe and efficient xylem sap transport and drought resistance in different taxa.

The wood structure of Syringa oblata var. giraldii growing on the northem slope of Mount Taibei varies with increasing altitude, rainfall and to some extent with plant size and stern diameter. On Mount Taibei rainfall increases with altitude from 1000-1800 m. Average growth ring width, vessel member length, vessel diameter, fibre-tracheid length and diameter, and ray height increase with altitude and rainfall; vessel frequency, ray frequency, and percentage of solitary vessels decrease along the same ecological gradient. These results are discussed against the background of general ecological trends: the unusual reversal of the altitudinal trends can be accounted for by the rainfall pattern associated with plant size variation on the northern slope of Mount Taibei. 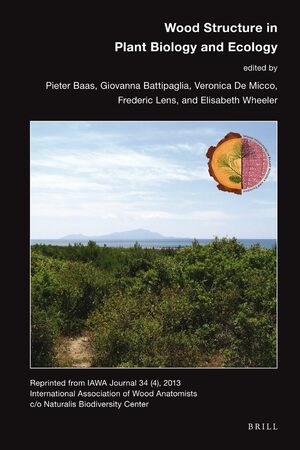 Wood Structure in Plant Biology and Ecology
Editor: Pieter Baas
At present the study of functional and ecological wood anatomy enjoys a vigorous renaissance and plays a pivotal role in plant and ecosystem biology, plant evolution, and global change research. This book contains a selection of papers presented at the successful meetings of the International Association of Wood Anatomists and the Cost-Action STReESS (Studying Tree Responses to extreme Events: a Synthesis) held in Naples in April 2013.
Four review papers address (1) the hydraulic architecture of the earliest land plants, (2) the general phenomenon of axial conduit tapering in trees, (3) the hydraulic and biomechanical optimization in one of the most important plantation grown tree species, Norway Spruce, and (4) cellular and subcellular changes in the cambium in response to environmental factors. Three papers review or introduce new tools to observe the 3-D structure and functioning of wood, and novel tools for quantitative image analysis in tree ring series. Finally, five papers report original research on environmental effects on wood structure, including studies on plastic responses in European beech, effects of fire or late summer rains on Mediterranean Aleppo Pine, and the potential for using arctic shrubs or tropical deciduous trees in dendrochronological and climatological studies.
Reprinted from IAWA Journal 34 (4), 2013.