were processed using Zoner Photo Studio version 12 and Adobe Photoshop CS3. Figure 1. Account of selected morphometric characteristics of embryonic development in Varanus indicus referred to the day of the incubation period (dpo). We scored each embryo for state of the embryonic

actually belonged to the god Amphiaraos, whose sanctuary stood in Oropos, and that the hill was thus unlawfully allocated to the two tribes. In order to resolve this conflict the Assembly of Athens decided to send a group of men to Amphiaraos’ sanctuary to undergo incubation and ask the god himself for his

[German Version] Incubation (Lat. incubare, Gk enkatheúdein, enkoimán, “to sleep in a sanctuary”) is the ritual practice of sleeping in a sanctuary for the purpose of experiencing a divine epiphany in one's dreams and of receiving help. The practice was especially cultivated in the healing

(even in the comic fracture of Aristoph. Plut. 698-747 Asclepius himself appears). In Graeco-Roman antiquity, just as in Byzantine Christianity, incubation was particularly practised in the  healing cults...

INCUBATION AND NEST BUILDING BEHAVIOUR OF BLACK-HEADED GULLS. I: INCUBATION BEHAVIOUR IN THE INCUBATION PERIOD by C. G. BEER1,2) (Department of Zoology and Comparative Anatomy, Oxford) (With 2 Figs) (Rec. 25-XI-1960) INTRODUCTION Some of the variation in an animal's behaviour can be found to

INCUBATION AND NEST-BUILDING BEHAVIOUR OF BLACK-HEADED GULLS V: THE POST-HATCHING PERIOD by C. G. BEER 1) (Department of Zoology, Oxford, England) (With 2 Figures) (Rec. I-VI-1965) INTRODUCTION The incubation period of a bird is terminated by hatching of the eggs. The appearance of chicks 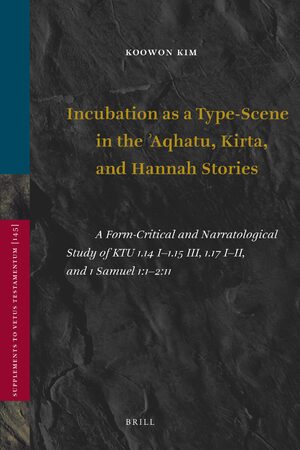 Incubation as a Type-Scene in the Aqhatu, Kirta, and Hannah Stories
A Form-Critical and Narratological Study of KTU 1.14 I-1.15 III, 1.17 I-II, and 1 Samuel 1:1-2:11
Series: Vetus Testamentum, Supplements, Volume: 145
Author: Koowon Kim
Prior studies of incubation have approached it from a history of religions perspective, with a view to historically reconstruct the actual practice of incubation in ancient Near East. However, this approach has proven unfruitful, not due to the dearth of relevant data, but because of the confusion with regard to the definition of the term incubation. Suggesting a way out of this impasse in previous scholarship, this book proposes to read the so-called “incubation” texts from the perspective of incubation as a literary device, namely, as a type-scene. It applies Nagler’s definition of a type-scene to a literary analysis of two Ugaritic mythical texts, the Aqhatu and Kirta stories, and one biblical story, the Hannah story.
E-Book

INCUBATION AND NEST-BUILDING BEHAVIOUR OF BLACK-HEADED GULLS II : INCUBATION BEHAVIOUR IN THE LAYING PERIOD. by C. G. BEER1) 2) (Department of Zoology and Comparative Anatomy, Oxford.) (Rec. 16-V1-1961) INTRODUCTION The first paper in this series (BEER, ig6i) described aspects of the be

The Effect of Hormone Treatment Upon the Duration of Incubation in the Bengalese Finch
Author: Erica Eisner

THE EFFECT OF HORMONE TREATMENT UPON THE DURATION OF INCUBATION IN THE BENGALESE FINCH by ERICA EISNER 1) 2) (Department of Zoology, University of Edinburgh, Scotland) (Rec. 17-VII-1968) The incubation behaviour of the Bengalese Finch, domesticated Lonchura striata, was intensively investigated