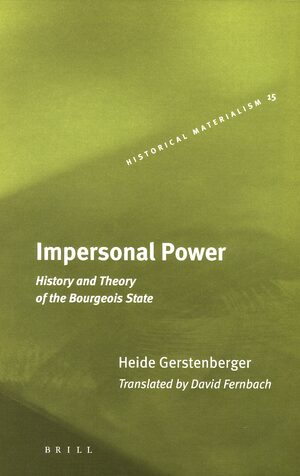 Impersonal Power
History and Theory of the Bourgeois State
Series: Historical Materialism Book Series, Volume: 15
Author: Heide Gerstenberger
The point of departure of Heide Gerstenberger’s path-breaking work is a critique of structural-functionalist theory of the state, in both its modernisation theory and materialist variants. Prof. Gerstenberger opposes to these a historical-theoretical explanation that proceeds from the long-term structuring effect of concrete social practice. This is elucidated by detailed investigation of the development of bourgeois state power in the two key examples of England and France. The different complexions that the bourgeois state assumed are presented as the results of processes of social and cultural formation, and thus irreducible to a simple function of capitalism. This approach culminates in the thesis that the bourgeois form of capitalist state power arose only where capitalist societies developed out of already rationalised structures of the Ancien Régime type.
E-Book

revolutions has correctly been analysed as legitimating capitalist social relations by negating their relevance in the political sphere. This negation is the essence of the bourgeois form of capitalist state-power. If the historical reality of capitalism has abundantly demonstrated that exploitation and