In: Studies on Decapoda and Copepoda in Memory of Michael Türkay
Authors: Yaqin Wang, Zhibin Gan and Xinzheng Li

Based on samples collected from the Yellow Sea in October 2014, a new species of pasiphaeid shrimp, Leptochela (Leptochela) tuerkayi sp. nov., is described. The new species is closely related to L. (L.) gracilis Stimpson, 1860 in morphology but differs from the latter and other congeners by the following combination of characters: three longitudinal dorsal carinae in ovigerous females, third maxilliped with the rather short exopod slightly overreaching the distal margin of the antepenultimate segment and the fourth pereiopod with the exopod reaching beyond the end of the merus. Morphological data and a partial sequence of the 16S rRNA gene of the new species are provided to show its systematic position.

Studies on Decapoda and Copepoda in Memory of Michael Türkay 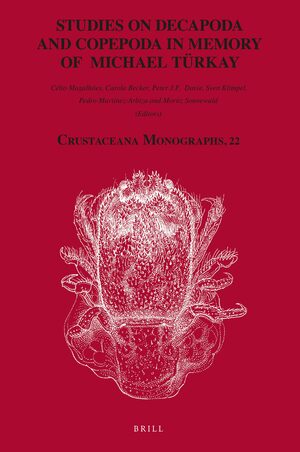