Health policy organizations recommend that health professionals refer patients with a substance use disorder to addiction-related self-help groups. However, the most common groups, the 12-step groups (e.g., Narcotics Anonymous [NA]) have religious wording (e.g., God, Higher Power, prayer) in their program that may cause potential participants to be sceptical, especially in secular cultures. From seven interviews with seasoned members of NA in Norway, we explored how the Higher Power concept of NA’s 12-step program is understood, how the respondents relate to their Higher Power in daily life, and whether they describe it as helpful in their recovery. A cross-case thematic analysis with systematic text condensation was used to analyze the data. Even the highly integrated NA members recounted an initial problem with the Higher Power concept. Eventually, the respondents realized that it was up to them to define the nature of their Higher Power. The respondents also defined the concept in secular or pseudo-religious ways. They were pragmatic believers; from early on they practised the recommended spiritual principles in NA (e.g., honesty and altruism), and dogmatism was considered unnecessary. The respondents presented relating to their Higher Power as vital for recovery, as they found motivation and strength to cope with the everyday process of staying clean and to continue in a recovery process. The present study sheds light on how secular and/or pragmatic, pseudo-religious worldviews can function similarly to specific religious views by helping people cope with demanding life experiences. The openness in NA toward diverse worldviews facilitates mutual support between members in a recovery process, despite differences in religious or spiritual persuasions. Health professionals should help potential participants overcome initial scepticism towards 12-step groups in order to gain access to the abstinence-based support obtainable in these fellowships.

Research in the Social Scientific Study of Religion, Volume 29 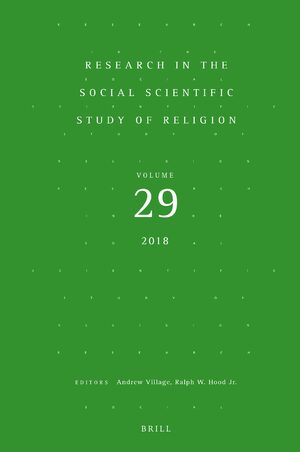