Intensification and Secondary Content: A Case Study of Catalan Good

This chapter is concerned with intensification as triggered by subsective evaluative good in Catalan (in examples such as una bona dosi ‘a good dose’). Its main focus is on providing an account of the fact that intensification only comes about in positive polarity environments. We first entertain an analysis based on the idea that positive polarity is the result of a mismatch of meanings contributed at different dimensions, but end up supporting an alternative in which the dimensions of evaluation of the noun play a crucial role in giving rise to intensification. More specifically, intensification arises when an object is only evaluated according to one dimension. Interestingly, uni-dimensionality is not preserved under negation, which prevents intensification from arising, and, in turn, makes positive polarity an illusion.

The Semantics and Pragmatics of Side Issues 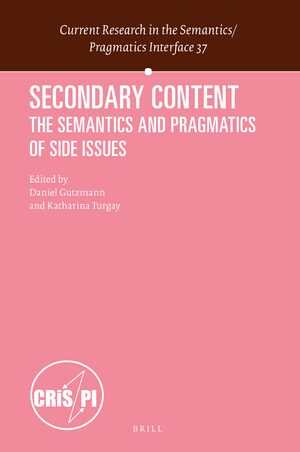