Dispute Regulation in the Institutional Development of the Asian Infrastructure Investment Bank: Establishing the Normative Legal Implications of the Belt and Road Initiative

The regionalism versus internationalism debate has given rise to a rich discourse in international trade law. Regionalism is viewed either as a way to promote international integration, or to protect regions and thus against the multilateral spirit that characterizes a truly global organization. This debate is explored in international financial law and international financial institutions therein, with the Asian Infrastructure Investment Bank (aiib) and New Development Bank as examples. This chapter suggests that ‘principled’ dispute regulation, having an intellectual anchor in ‘multilevel governance’, provides a new dimension to underpin regional governance. Exploring China’s Belt and Road Initiative (bri) has the potential to redefine multilevel trade governance and the laws that establish its order. As a result, new ‘Eastern’ international legal norms are emerging. A new international trade and investment order will necessarily lead to disagreements over its interpretation. However, existing dispute resolution mechanisms may not work effectively. In order to overcome this practical challenge, this chapter examines some important legal aspects of the bri and offers a new concept of dispute regulation. For the central argument, mediation will be specifically analyzed to inform a new aiib paradigm. The chapter intends to begin a discussion of some emerging trends in international trade and relevant rules, in the context of the aiib.

International Organizations and the Promotion of Effective Dispute Resolution 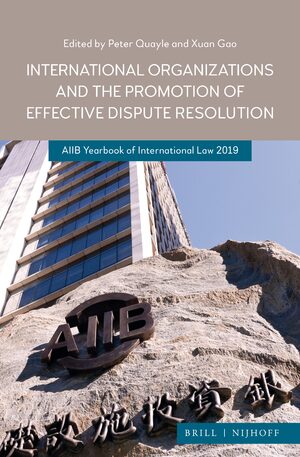