This chapter outlines a history of the concept of ius gentium. It is intended to serve as a contribution to the intellectual history of international law, from Late Antiquity to Early Modern Times. The historical role played by the concept in the framing of international law is not easy to evaluate, as the oldest traces of Roman ‘public international law’, in the sense of law regulating relations between polities, are actually found within ius fetiale. It is, in fact, difficult to arrive at a clear understanding of ius gentium in the history of Ancient and Medieval legal thought, due to a semantic stratification dating back to Roman Antiquity: on the one hand, a fundamental ambiguity exists in the relationship between ius naturale and ius gentium (as in Gaius’ definition, Dig. 1.1.9, possibly under Ciceronian influence) – on the other, the latter, first classified as a branch of the ius privatum (Ulpian, Dig. 1.1.1.4), was later understood as including public law institutes (Hermogenian, Dig. 1.1.5) and even institutes mainly relating to foreign relations (Isidore of Seville, Etymologiae V.6 = Decretum c. 9, d. 1). The simple juxtaposition of these definitions within Justinian’s compilation and Gratian’s Decretum raised several theoretical issues for Medieval jurists, and generated a significant scholarly debate. Firstly, following Dig. 1.1.4 and Dig. 1.1.5, glossators argued that ius naturale and ius gentium – not, as would be claimed by later jurists, Roman law as a whole – formed the ius commune. Secondly, commentaries on Dig. 1.1.5 analysed the various legal institutes listed within the passage, focusing particularly on dominium and obligations. Thirdly, both jurists and theologians elaborated extensively upon the connections between ius gentium and ius naturale: they first drew a distinction between ius naturale primaevum and secundarium, and then reformulated this distinction in such a way that ius gentium itself was split into ius gentium primaevum and secundarium. Many words were to be expended on this distinction until well into Early Modern Times, in the course of a discussion which recent scholarship has studied in depth. This chapter, however, will focus less on this doctrinal debate during the the sixteenth and seventeenth centuries than on the transformation undergone by ius gentium as it developed into a ius inter gentes specifically regulating relations between political communities. Special attention will be paid to diplomatic theory, which has proven to be a particularly interesting field within which to fully evaluate the slow emergence of the state as the only legitimate subject of international law.

Ideas and Institutions from Antiquity to Modernity 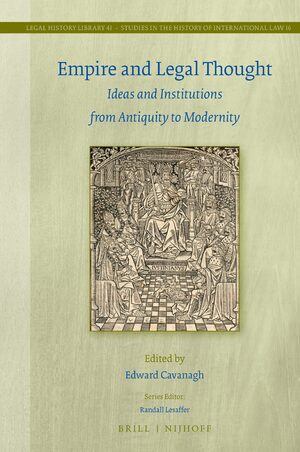