Avant-Garde and Architecture in Czechoslovakia 1909-1938

Source material for the study of Czechoslovak avant-garde and architecture in the period before the Second World War is very difficult to find. As is the case for comparable material in the West, this difficulty is due on the one hand to the small editions and on the other to the political and cultural situation after 1945. It is as though the political division of Europe not only disrupted the cultural continuity but also obliterated the cultural memory of Western Europe. This is the more remarkable because thinking in international terms was one of the characteristics of the avant-garde movement.

Early in the twentieth century the influence of the Wagner school on architecture was very strong. The Czechoslovak adherents of this school undertook the battle for a new architecture in their country. A number of architects who had become aware of French Cubism very early, arrived at a new form of architecture comparable to that of German expressionism after the First World War. Starting in 1918, there was a rapid growth of international contacts and exchanges. Contacts with The Netherlands (Van Doesburg), Germany (Bauhaus), Russia (Constructivism), and France (Le Corbusier) made Czechoslovakia an equal within the European movement for a new architecture. A comparable development can be seen in the arts and literature. The influence of modern French poetry and later that of Surrealism was of great importance in this respect.

This collection contains 6 periodicals and 5 monographs with special importance for the study of the Czechoslovak avant-garde and architecture in the period before the Second World War. It gives an excellent picture of developments during this period. 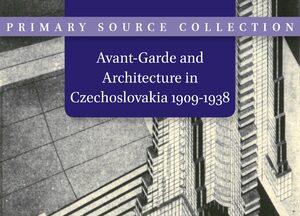